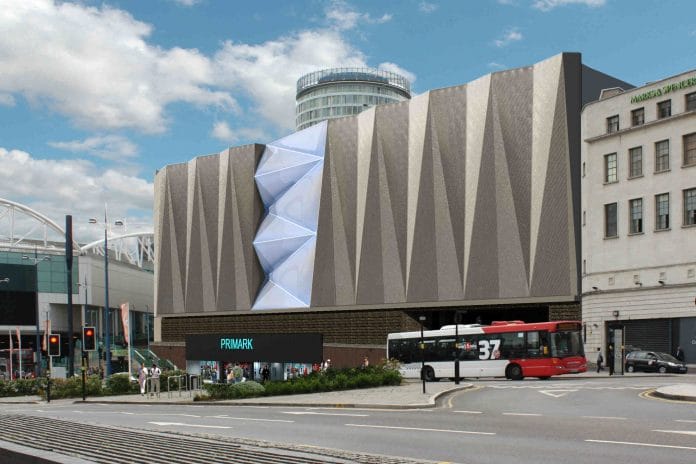 Primark has unveiled details and a CGI impression of its largest ever store that is slated to open in Birmingham in December this year.

The new store, to be located at Birmingham Pavilions, will employ approximately 900 people and showcase five floors of fashion, beauty and homeware over 160,000sq ft of retail space.

Once open, the new Birmingham store will be Primark’s biggest in the world.

Of the total 900 staff count, around 500 will derive from a hiring spree while 430 employees at Primark’s current city centre location at Birmingham’s New Street will transfer to the new Pavilions store.

Primark said recruitment for the 500 new jobs will begin in August.

For customers, the new store will come with a contemporary shop fit, bespoke design areas, and customer “recharge” seating areas.

Meanwhile, employees’ areas will feature open spaces with modern features and comforts such as a café and a fully equipped kitchen area.

“The new Primark in Birmingham will be the largest in the world, offering an even wider range of our amazing fashion at amazing prices, over five floors,” a spokesperson said.

“We have a loyal customer base in Birmingham and are very excited to unveil the new store, which will be almost four times the size of our current city centre store.”

When news of the store was first revealed last year, reports suggested that Primark acquired the Pavilions site for £60 million in 2014, while the redevelopment plan for it was approved in January 2016.