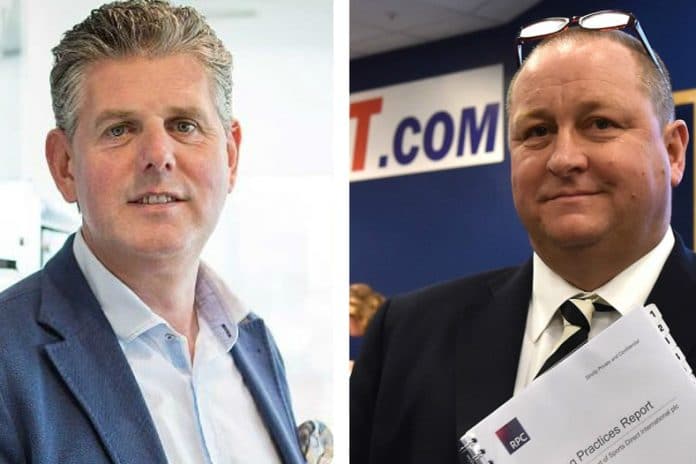 While much of the old guard in retail seems to be crumbling throughout Britain’s high streets, with established names falling by the day and those who survive instead seeking refuge online, two men are seizing the opportunity to build their empire on top of the rubble.

Mike Ashley and Philip Day are remarkably similar in a lot of ways. They are both worth over £1 billion, they are self-made entrepreneurs from unprivileged backgrounds, and they are both fast becoming the new kings of the high street.

Perhaps the most import similarity is their method in doing so; by buying up embattled retailers at a rock bottom price and using their considerable resources to return them to profitability.

Its little surprise that the pair were both contenders to acquire House of Fraser, the recently collapsed yet iconic department store chain.

But just who are these two new high street powerhouses, and how much of the UK’s retail market do they currently have a stake in?

Much like his counterpart Mike Ashley, Day is a self-made billionaire who began his lucrative career from humble beginnings, having grown up on a council estate in Greater Manchester.

Though he cut his teeth in retail from an early age running a newsagent, Day’s retail career started after he turned down a university offer and took a position at supplier Coats Viyella and Wensum, before being headhunted by Aquascutum at 28.

He worked his way through the ranks at the luxury retailer to become global managing director, where he oversaw its most profitable period for quarter of a century.

In 2001 Day began to build his empire, using backing from the Bank of Scotland to purchase struggling retailer Edinburgh Woollen Mill (EWM), the foundation on which his retail empire is now built.

Having formed the EWM Group, day began picking up retailers in similarly distressed situations building a retail estate which spans over 1000 stores and concessions and employs more than 24,000 people.

Aside from his considerable retail assets, which include Peacocks, Jaques Vert, Jane Norman, Austin Reed and his own Days department store which he launched in 2017, Day has amassed a portfolio which spans not only property but major energy and agricultural investments.

In 2016 construction began on the Greengill Anaerobic Digester in Cumbria, one of the most efficient natural energy power plants in the world in which Day has invested £57 million, with a view to building more in the near future.

This also includes a farming co-operative in North England, which produces both food and agricultural products, alongside a portfolio of historic rural buildings like mills which he has converted into hotels and holiday homes. He now employs 290 people across his energy and agricultural businesses.

Day’s empire continues to grow at a significant pace, and could soon include a number of House of Fraser stores.

Though Day’s offer of £100 million, which would have included all the supplier and pension liabilities, was rejected in favour of Ashley’s £90 million bid, he is understood to be in talks with a number of landlords with a view to turning sites into his Days department stores.

10 years ago EWM Group acquired Ponden Mill and Roseby’s, which were subsequently merged into Ponden Home.

Scottish golfing brand ProQuip was acquired a year later, followed by Jane Norman in 2011, Peacocks in 2012, Austin Reed later in 2016 alongside brands Country Casuals and Viyella.

Last year he bought Jaeger out of administration and launched his first Days department store in Wales.

This year he acquired two separate companies containing a group of brands, including Berwin & Berwin which owns brands Paul Costelloe, Lambretta and Baumler and Calvetron Brands which includes the likes of Jacques Vert, Precis, Windsmoor, Eastex, and Dash.

Outside if his retail portfolio, he owns the Scottish Deer Center in Fife, Greengill Anaerobic Digester in Cumbria which is set to expand internationally in coming years, various agricultural investments and a historic property portfolio which is now used as hotels.