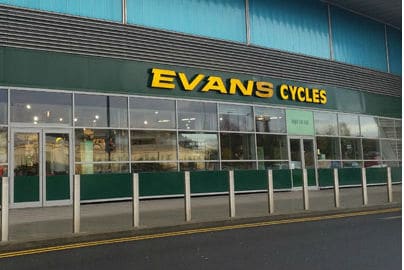 Sports Direct is poised to axe hundreds of jobs at Evans Cycles after it acquired the cycling retailer and revealed plans to close half of its stores.

The retailer, which had been seeking a buyer after it put itself up for sale last month, went into administration yesterday before being immediately sold to Sports Direct in a process known as pre-pack administration.

“However, in order to save the business we only believe we will be able to keep 50 per cent of stores open in the future.

“Unfortunately some stores will have to close.”

Landlords of Evans Cycles stores will be contacted in the coming days to discuss the future of individual stores.

When the cycling chain put itself up for sale in September, it sought to secure £20 million to fund its rescue plan.

Founded in 1921 by London cyclist Frederick W Evans, the retailer is now owned by private equity firm ECI Partners, who originally appointed PwC to advise it on a financial restructuring and manage the sale.

PwC was reportedly in talks with a number of potential bidders since it Evans Cycles went on sale, including JD Sports and Sports Direct.

However, Halfords initially emerged as the most likely suitor to take over the chain after it tabled an offer.

“2018 has been a very difficult trading year for the business, in part due to the impact of the extended winter weather in the early part of the year and a lack of cash to invest in stores and develop the online platform,” PwC joint administrator Matt Callaghan said.

“A combination of losses, the capital expenditure requirements and tightening credit has led to a liquidity crunch.”