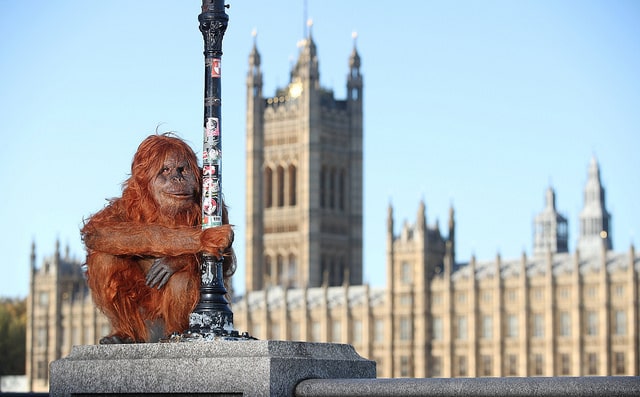 The Christmas advert that has everyone talking has been followed up with sightings of a realistic orangutan across London.

Last week, Iceland grabbed headlines when it unveiled its festive advert online after it had been banned from being shown on TV by broadcast regulator Clearcast.

The advert breaks the mould of retailers’ traditional Christmas campaigns with a short film called Rang-tan, which tackles the issue of palm oil and the destruction to orangutans’ natural rainforest habitats caused during its production.

The campaign also highlighted Iceland’s commitment to remove palm oil from its own-label products by the end of the year.

This morning, Iceland followed up its banned advert with a marketing stunt that saw a distressed orangutan on the loose and clinging to a Christmas tree at Coin Street at Southbank.

Further sightings were reported at locations across the capital including Oxford Street and the parks of London where the ape appeared to be in search of a new home.

A team of leading special effects artists spent months designing and building the replica orangutan, which was controlled both remotely and via a specialist puppeteer who spent years studying the movements of the endangered species.

“Our stranded, distressed orangutan is a stark and potent symbol of the effects of deforestation,” Iceland managing director Richard Walker said.

“We always try to give people a real choice about what they buy and this was a key driver of our decision to allow Iceland customers to join us in saying ‘no to palm oil’.

“We are determined to be at the forefront of efforts to guarantee palm oil is not causing rainforest destruction and Iceland will continue to be a driving force until this environmental impact is drastically reduced.

“I am immensely proud of the work our food development team has carried out to create this new Christmas range without palm oil – a celebration of our commitment to end its use before the year closes.”

It has also gained support of numerous high-profile figures including James Corden and Paloma Faith.

The advert was originally created and used by Greenpeace earlier this year, but an agreement was reportedly reached that Iceland could use the video as part of its Christmas campaign.

Clearcast reportedly banned the ad from TV broadcast because it didn’t comply with the political rules in the Broadcast Code of Advertising Practice.

Iceland said its realistic puppet orangutan will be touring regional stores throughout November.