Watches of Switzerland has recorded an increase in sales within the first quarter of becoming a listed firm.

The luxury watch retailer recorded a 17.8 per cent increase in group revenue to £209.4 million for the three months to July 28.

Group like for likes increased 10.8 per cent up from a 7.3 per cent increase for the same period the previous year.

Although the retailer said the “luxury watch markets in the UK and US remain strong” it remains aware of the “ongoing wider macroeconomic uncertainty” in both countries.

“Our first quarter as a listed business saw continued strong underlying growth in both the UK and US, supported by the expansion of our showroom portfolio,” Watches of Switzerland chief executive Brian Duffy said.

“Our focus on store upgrades and store customer service, supported by increasing digital and social marketing, and closer collaboration with brand partners, is working.”

Watches of Switzerland was valued at £647 million when it was listed on the London Stock Exchange in June, as part of a wider five-year transformation plan.

The company has spent £33.8 million on its store estate, delivering seven new showrooms including two flagships, plus 11 refurbished, one expanded and two relocated stores. 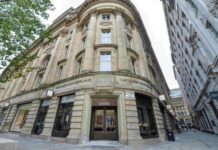