Struggling UK high streets that could do with having access to funding to help their revival have been snubbed by the government’s latest round of funding, research has shown.

Prime Minister Boris Johnson recently announced the second phase of the Future High Street Fund, a £1 billion investment now available to 100 towns in England to submit plans for the reinvention of their high streets.

Retail property consultancy firm Harper Dennis Hobbs found that of the 10 English local authorities with town centres in most need of investment, only Rotherham was included in the second phase of funding – based on the firm’s Vitality Index, an analysis of more than 1000 UK shopping districts.

Of the remaining nine, two-thirds sit electorates that happen to be safe Labour seats and the areas that are receiving the funds happen to sit within more marginal parliamentary constituencies

Fifty high streets and their local authorities were announced as being included in Phase 2 of the funding, with marginal constituencies dominating the list.

Despite the Vitality Index ranking Leamington Town Centre as the 82nd best high street in the UK, it was still included in Phase 2.

Harper Dennis Hobbs’ Vitality Index determines the retail health of a shopping area based a number of factors, including the level of retail vacancy, the number of “undesirable” tenants like pawnbrokers, money lenders and bookmakers, and the fit between the retail stock in the town and catchment shoppers.

“While it is encouraging to see this investment in many of the high streets of England’s small towns, this is just the tip of the iceberg when it comes to reinventing the retail sector across the country,” Harper Dennis Hobbs head of retail Jonathan De Mello said.

“With an election looking likely, it is little surprise that the Prime Minister has signposted investment towards marginal seats, largely in Brexit-supporting regions.

“These marginal seats will shape the make-up of the next Parliament, and government investment in their high streets will arm the Conservatives with powerful local campaign messaging.

“Of the 10 English local authorities we have identified as having the worst performing retail centres, just one has been shortlisted for funding.

“It is disappointing that some of the local authorities most in need of further rejuvenation – such as Gedling in Nottinghamshire, Salford in Greater Manchester and Knowsley in Merseyside, are likely to miss out, possibly due to political decisions.”

English local authorities with the least ‘healthy’ retail centres, according to the Vitality Index are: 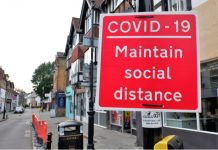