// Michael Ward fears this would stop the flow of money overseas

Speaking to The Times, the iconic department store’s managing director Michael Ward said a Corbyn-led administration would lead to exchange controls — government-imposed restrictions on the movement of currencies — being reintroduced to stop the flow of money overseas.

Exchange controls were last abolished in the UK in 1979 under the Margaret Thatcher administration.

Harrods not only depends on sales from tourist customers more so than domestic shoppers, it has been owned by Qatar Holdings since 2010.

The Qatari-government owned company has since made more than £900 million worth of dividends, which includes the £125 million it banked in 2018.

Ward also told The Times that Harrods experienced a slip in full-year profits due to a shorter accounting year coupled with a major refurbishment investment in its world-famous Knightsbridge flagship.

Harrods’ pre-tax profits reportedly dropped three per cent to £171.6 million in the year to February, while sales edged up from £862.8 million to £868.5 million.

Ward said Harrods had spent £64.1 million in the past year, which was 17 per cent more than in the previous 12 months.

This was spent on overhauling and doubling the space of the flagship store’s beauty hall, renovating its historic food halls, and creating a whole floor to men’s clothing and sportswear.

Harrods’ refurbishment works is ongoing and forecast to be complete within 18 months. 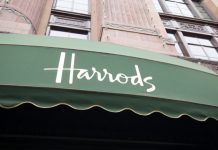