Various news reports have emerged that Lidl is poised to launch an online grocery shopping service for its customers for the first time.

It comes as the German discounter put out a job advert for a new digital project manager whose role will be “to deliver a new online platform” as well as “driving online sales”, while also being responsible for “multiple projects to enhance business growth and revenue”.

The job advert also says the new role would work closely with the digital director and the head of ecommerce.

Lidl has told both The Mirror and i newspaper that the business has a digital department “already established” and that online was “something we’re looking at”.

No further details were revealed, but the discount grocer said it would provide further information “if and when” there are any developments to announce.

While Lidl has a UK website, it not sell groceries online directly to consumers to date.

All of the Big 4 grocers currently offer online delivery, while M&S struck a £750 million joint venture deal with Ocado to bring its food division online directly to consumers.

Lidl first launched in the UK in 1994, and currently operates 760 stores in the country.

Last week, it opened its biggest warehouse yet in Scotland as part of an ambitious expansion plan involves scores of new stores in the region, as well as in Manchester and London. 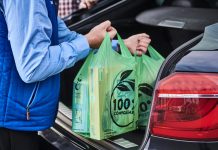