// The retailer made an underlying EBITDA loss of £2.7 million

Sosandar has recorded a rise in first-half sales thanks to its increased brand awareness attracting active customers by 70 per cent.

In the six months to September 30, the online womenswear retailer posted a 53 per cent rise in revenue to £2.82 million.

The retailer made an underlying EBITDA loss of £2.7 million, up from £1.9 million in the comparable period, which it said reflected the “increased upfront investment into the team, product and marketing”.

Meanwhile, Sosandar’s order growth rose 47 per cent to 64,709 in the first half, when “active customers increased by 70 per cent reflecting the increased brand awareness following the trial of new marketing initiatives”.

The retailer also said there had been ”sales growth of well over 100% in October”.

“The investments that were made in the latter part of the second quarter have resulted in exceptional autumn trading,” Sosandar joint chief executives Ali Hall and Julie Lavington said.

”Post period end, October was particularly notable, as we hit a special milestone – the first month where net revenues exceeded £1 million, a performance which November is on course to exceed.

”It is becoming increasingly clear that once customers engage with Sosandar’s product range and unique design aesthetics they remain loyal to, and highly engaged with the brand.

“We have seen continued database growth post period, with our number of subscribers in September up 26 per cent month on month and new subscribers tracking over 300 per cent up versus the same period last year.

”Our vision is to be a global one-stop online destination for our customers, and with a widened product range, strong balance sheet, and a broadened, aggressive, and increasingly effective marketing strategy, we are confident that full-year ’20 will be an important next step in that journey.” 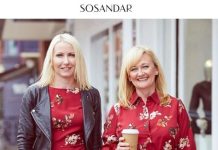