// Operating profit margins across the group increased to 10.25% while group revenues stood at £327.14m

Edinburgh Woollen Mill Group has declared no dividend payout in its latest trading update, despite the Philip Day-owned company registering growth across the business.

In accounts seen by Retail Gazette, which are expected to be filed at Companies House later this week, EWM Group declared and approved nil dividends for the 27-week period ending March 2 this year.

This compares to dividend worth £40 million that was declared and approved in the previous period, which covered 78 weeks ending August 25 last year.

For the latest period, EWM Group revealed a profit after tax of £23.32 million and group revenues stood at £327.14 million.

It is not possible to directly compare profit and sales figures on a year-on-year basis due to the 78-week period it reported in 2018.

However, EWM Group said its operating profit margins had risen 10.25 per cent, compared to 8.27 per cent in the previous period.

Finally, EWM Group said it has a significant cash balance of £117.8 million and continues to be bank debt free, with no external bank borrowings and undrawn committed bank facilities of £100 million.

A spokesman for Day’s retail empire told The Guardian that it continuing to search for additional retail acquisitions to grow its presence on the high street.

EWM Group said Jaeger has expanded and seen losses reduced “substantially” to £1.1 million compared to a loss of £6.5 million recorded in the 74-week period in 2018 – the year after the company bought the retailer out administration.

The company also opened 18 new standalone stores – seven of which belong to Jaeger – and 21 concessions during the 27-week period.

Meanwhile, in March this year the Austin Reed, Berwin & Berwin and Jacque Vert divisions – including Dash, Eastex, Windsmoor – were formally consolidated and brought under the Jaeger umbrella, providing a single luxury tailoring division for EWM Group.

More recently, Peacocks emerged as the preferred new owner for Bonmarché, which Day acquired via his investment firm Spectre in August before the fashion chain fell into administration in October. 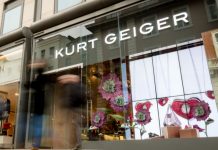