// Next store sales drop is offset by online sales

// The company has warned on local lockdowns causing uncertainty to business

// The business does more than half of its sales online

Next has raised its full-year profit forecast after sales beat expectations in the third quarter, but has warned on uncertainty affecting its trading in the fourth quarter.

The fashion retailer’s online sales were up 23.1 per cent in the third quarter, offsetting a 17.9 per cent drop in retail sales.

The business, which does more than half of its sales online, said overall sales were better than expected, up 2.8 per cent in the three months to October 24, compared with the same period a year ago.

READ MORE: Next accused of destroying documents ahead of equal pay court case

Home and children’s clothing continued to perform strongly but demand for formal and occasion clothing had slowed down.

The retailer is now expecting a full-year pretax profit of £365 million – £65 million more than forecasted in September.

However, Next said there is a “high degree of uncertainty” in the estimates, with the biggest fear being a decision by England, Scotland and Northern Ireland to close non-essential shops.

In Wales, a full-force lockdown has already taken place, with shops only being made to sell essential products.

Next said that such a closure for two weeks could see its full-price sales fall by up to 20 per cent for the fourth quarter, while further local lockdowns could result in an eight per cent.

Nevertheless, the retailer said it was “well prepared” to operate effectively for Brexit – whether the UK agrees a trade deal with the EU by the end of the transition period or not. 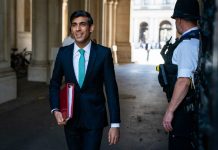 Small retailers not clear about new rules to post goods to...