Lewis – who was given knighthood earlier this year – stepped down from the retailer in September after turning around its fortunes over the past six years following its major accounting scandal.

Tesco’s annual report revealed on Tuesday that he was handed £951,000 in fixed pay for the period, consisting of £735,000 in salary as well as pension and other benefits.

It comes a year after Tesco’s pay deal for the 2019/20 year, which handed Lewis £6.4 million, was voted down by shareholders.

The remuneration report for last year was criticised by shareholders and advisory groups for revealing the significant pay deal after high-flying Ocado was removed from a calculator used for bonuses.

Tesco said that the board has spoken with investors in the aftermath and this calculator would not be used for further pay deals.

It said that executives would receive a total payout of £5.9 million for the 2020/21 financial year, almost half the £11.7 million that it handed out in the previous period.

Alan Stewart, who was replaced as chief financial officer by Imran Nawaz earlier this month, received a pay package worth £1.42 million, according to Tesco’s annual report.

Murphy, who took over the reins in September, was handed £629,000 in pay, as well as £363,000 compensation payment for money he forfeited from a non-compete clause he had at previous employer, Walgreens Boots Alliance.

The report also revealed that Tesco had a gender pay gap of 6.8 per cent over the year, having reduced this from eight per cent in the previous financial year.

The retailer said this was partly driven by the fact it has a higher number men in more senior roles. 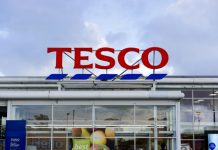