// Deichmann is set to expand its presence in the UK

Europe’s biggest shoe retailer Deichmann is looking to expand its UK footprint and believes it could double its estate of 109 stores as it takes aim to become the market leader in “family footwear”.

The privately held German retailer has had a presence in the UK for 20 years but only has a small market share, with its latest accounts for 2019,showing revenue of just £104 million.

“We are very keen on the UK as one of Europe’s largest markets,” said Samuel Deichmann, the great grandson of the chain’s founder and who is now running its UK operation.

“We see a lot of potential here, we want to be the market leader in family footwear like we are in many central and eastern European countries”.

The 28-year-old didn’t specify a target for store numbers or market share.

“We don’t want to do anything reckless,” he said, adding that “we are a family-owned company that thinks in generations, not quarters”.

But he said he saw “no reason in the medium to long term” why the store estate could not double in size, pointing out that in its home market of Germany Deichmann has more than 1,000 stores and is approaching 200 in the Netherlands and Switzerland.

The group has been “fine-tuning” its offering for the UK market, which has been upended by the growing trend towards more casual and less formal dressing, compounded by increased working from home and higher levels of ecommerce during the pandemic.

Despite shifting its focus on physicals stores, Deichmann said the group was also committed to online sales.

The retailer is fitting out a new distribution centre that will serve both stores and home delivery in a bid to tap into the booming ecommerce market. 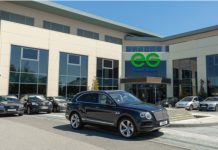