Retail sales grew continued to grow by three per cent in August thanks to the “resilience” of the grocery sector, but both growth and online sales slowed considerably.

August saw total sales growth slow from 6.4 per cent a month earlier, in what experts are calling a softening of “post-lockdown pent-up demand”.

According to the latest figures from the BRC-KPMG Retail Sales Monitor, online retail sales also fell by 4.6 per cent in August compared to a whopping 42.4 per cent growth a year earlier.

This meant that the proportion of online sales fell from 42 per cent in August 2020 to 38.3 per cent this year, though this was still 9.3 per cent higher than pre-pandemic levels.

“While the online sales growth has begun to slow, it is still high when compared with pre-pandemic growth rates,” BRC chief executive Helen Dickinson said.

“This demonstrates how the pandemic has shifted the digital-physical shopping balance and increased the linkage between the two channels.”

Grocery sales in the three months to August grew by 2.9 per cent year-on-year, significantly less than the 12-month average of 14.4 per cent growth.

Despite this, Shore Capital’s Clive Black believed the figures were “very encouraging given the challenging, albeit easing comparatives”.

Overall growth was also driven by formalwear as swathes of workers returned for the office for the first time in over a year.

Dickinson added: “With wedding season in full swing and workers gradually returning to the office, formalwear was a strong performer.

“Additionally, the bank holiday weekend and back-to-school buzz contributed to a rise in non-food sales.” 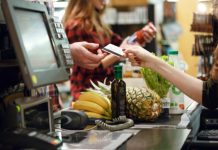 Grocery sales rise as Brits splash out on premium foods