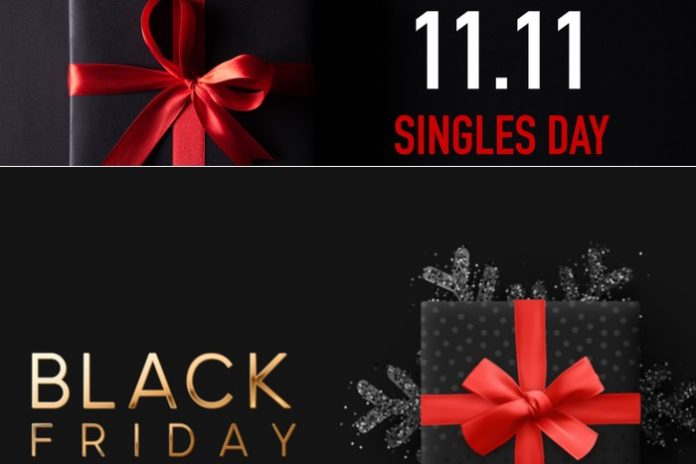 Black Friday traditionally takes place the day after Thanksgiving Day in the US and began in the early 1950s, and is now synonymous with chaotic scenes of shoppers storming into shops the moment they open in a bid to take advantage of the massive discounts.

The shopping event has only recently solidified itself on the UK retail calendar – mostly thanks to Amazon.

Meanwhile, Singles Day – which takes place on November 11 each year – began as a celebration for single people in China back in the 1990s.

Singles’ Day became a major commercial event in China in 2009 when Alibaba offered deeply discounted merchandise on its platform for 24 hours.

There is no doubt that both events present major opportunities for retailers to drive sales and acquire new customers.

Although the Covid-19 pandemic displayed a real threat to retailers last year due to lockdowns, many businesses are banking on driving their online sales this year.

Last year, Black Friday took place in late November when England remained under national lockdown. With no current threats of another lockdown taking place later this year, the sales extravaganza could break records for both sales and the level of discounting.

Arguably, Black Friday’s popularity lies primarily in the US, and its lack of interest among British customers – at least in the high street context – is often the subject of online jokes.

This means retailers across the UK may be faced with the additional work of having to create mass appeal for British consumers.

Although data firm Springboard recorded a rise in UK footfall by 8.7 per cent during Black Friday last year, Barclaycard found that last year’s Black Friday retail sales in physical stores and online fell by more than a 10th compared with 2019.

Brian Atkinson, general manager and vice president EMEA at software firm Five9, said last year proved the unstoppable rise of ecommerce and this year’s discounts event of the season will see online retailers showing no signs of slowing down.

“High streets will inevitably be trying to keep up the pace to compete with the online stalwarts,” he said.

“We may also expect retailers to slash prices for longer than just the one weekend in November. It wouldn’t be surprising to see discounts start by late October, to manage supply and demand and ease customers’ fears about being in crowded stores.

“Retailers know the opportunities Black Friday can bring and the last 18 months have not been an easy ride. This is their chance to provide customers with pre-festive deals that will bring joy and lift businesses profits.”

Domenica Di Lieto, chief executive of marketing consultancy, Emerging Communications, told Retail Gazette that the big difference between Singles Day and Black Friday is that the former is a major national festival.

“An occasion that retailers and consumers plan well in advance with an excited public that looks forward to joining in to experience the entertainment, as well as bargain offers,” she said.

Meanwhile, Jessica Chapplow, head of ecommerce at global communication group Havas Market, argued that the savviest of retailers will also be keeping an eye on cross-border ecommerce opportunities.

“Despite restrictions lifting in the UK, across Southeast Asia, travel restrictions and quarantine requirements at government facilities mean that any retailers participating in Singles Day in the west will be able to capture a significant minority of Asian and Chinese consumers who are unable to travel abroad,” she said.

“Considering this, these shoppers already view cross-border shopping as an appealing alternative and will no doubt be on the lookout for Black Friday and Singles Day deals.”

The Covid-19 pandemic has undoubtedly affected the retail sector, with thousands of job losses and sales lower than ever.

Retailers might expect shoppers to hold out buying things until the Black Friday sales start, which has a direct impact on the number of sales on the run up to Black Friday.

Although Black Friday has been seen as key trading on the run up to Christmas, more and more retailers are focusing on offering good value deals all year round instead of just over a few days.

Nevertheless, Singles Day has proven to be a huge success in China, where sales have overtaken both Cyber Monday and Black Friday sales combined.