Although we may not realise it until it’s too late, us Brits really do have a place in our hearts for our favourite high street retailers.

As such, it can be devastating for both staff and loyal customers whenever a retailer goes under, with panic for employees looking to find new jobs, and customers sad to see their favourite go-to shops close.

A new study by Raisin UK has analysed the search volume and social media engagement with our favourite retailers to find out which ones we miss the most, so get ready for a little bit of nostalgia as we analyse the past of our high streets.

Did we include the store you miss the most? Let us know down below!

In May, all Debenhams stores closed their doors permanently, following the failure of last-ditch efforts to rescue the failing department store retailer, after it landed in administration for the second time in a year.

Some 57 per cent of people reacted sadly to the news the business had collapsed as it was a key part of the British high street, one of the UK’s largest department store retailers after the earlier collapse of BHS.

Boohoo snapped up their online operations to bring Debenhams back online, selling a range of the usual concessions and beauty products that customers loved, with the reintroduction of the beauty club and now its own physical beauty store.

When false news spread last year about the possible return of the retailer, 44 per cent of people reacted positively, according to Raisin UK. Saying saying they loved the news proved that even all these years later, Woolworths still has a place in our hearts.

As the shutters closed on the chain’s final 199 shopfronts in market towns across the UK in 2009, a significant piece of high street history faded away.

Woolworths had aisles full of affordable impulse items that had no business in being merchandised together. Your school stationery set next to bottles of perfumes and socks, Woolworths was just the place to be.

British Home Stores, AKA BHS, was one of the UK’s largest department store chains, selling clothing and household items. In its later years, the retailer expanded into furniture, electronics, entertainment, beauty and even convenience groceries.

BHS was part of the Arcadia Group, managed by Sir Philip Green who later sold BHS for £1 in March 2015 to Retail Acquisitions Ltd. Led by the serial bankrupt Dominic Chappel, it was almost set for failure.

With 51 per cent of people reacting angrily to the collapse of the brand, blame was certainly pointed at Sir Philip Green’s management of the group.

All BHS stores closed by late August 2016, making it the biggest retail collapse after Woolworths. The rest of the Arcadia Group suffered the same fate as BHS in 2021 as they collapsed, leading to the loss of Topshop, Burton, Dorothy Perkins and more.

These brands were later moved online and bought by ASOS and Boohoo. The BHS brand was later bought and now operates online selling ceiling lighting.

Mothercare has always been a popular retailer for parents across the UK, so it comes as no surprise that 55 per cent of people had a sad reaction to the brand’s collapse announcement on social media.

In November 2019, Mothercare announced it was to close it’s UK business after calling in administrators. The retailer, which opened its first store in 1961, had frequently struggled to compete with cheap supermarket clothing ranges and the rise of online shopping.

Many parents had strong emotional attachments to the business, with Mothercare being the leading childrenswear chain in the UK.

Since then, the retailer has completed a franchise deal with Boots, meaning the pharmacy chain can now sell Mothercare-branded products within Boots stores, allowing the brand to return to the high street.

The Mothercare website has now also moved to the Boots website, allowing new parents to continue to purchase from the brand as usual. 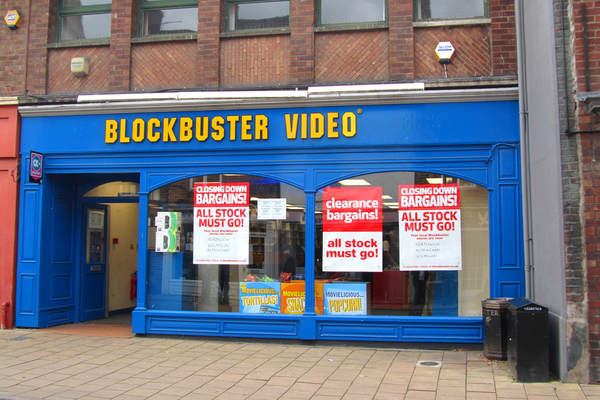 There’s no surprise that Blockbuster is featured in this list, as it still racks up 3.6k online searches every month.

The business collapsed into administration back in 2013, being a huge casualty to the high street with the closure of 528 stores.

It joined several other retailers, such as Jessops, HMV (which survived administration again and again and again) and electrical chain Comet in being affected by online competition.

Kevin Mountford, financial expert and co-founder of Raisin UK, had this outlook for the future of our high streets.

“In the past year, we’ve seen many brands such as Debenhams, Wallis, Dorothy Perkins, Burton, Topshop and Topman being snapped up by online giants Boohoo and ASOS. With high street rent high and footfall low, as time goes on, we will be seeing more ‘online-based’ fashion brands doing the same thing. Yes, physical stores may have to close, but with an online presence, brands can now be stretched to serve younger audiences?

“With these online brands able to tap into their audience demographic, is there a chance for older brands to be re-born and start from scratch, appealing to newer audiences without the price tag? Online presence is absolutely key.”

Do you agree with Mountford? Let us know down below