Branded suit specialist Moss Bros has reported today a 10.5 per cent rise in like-for-like (LFL) sales since the summer and a positive start for its new store format.

LFL cash gross profit was up 7.9 per cent for the company in the 19 weeks ending December 10th 2011, in spite of the difficult trading environment and the pressure put on margins by rising raw material costs.

In the first 45 weeks of its financial year the retailer has seen sales jump 13.4 per cent LFL and 18.5 per cent in total, and the business remains in a strong cash position thanks to the £12.3 million proceeds of the Hugo Boss disposal which has now all been received.

Brian Brick, CEO of Moss Bros, commented: “We are encouraged by the sales momentum throughout the business which has continued into this year, despite tougher comparatives.

“The simplification of the business model, following the disposal of the Boss franchise stores and Cecil Gee stores, has enabled us to focus on the strengths of the core Moss brand.

“We enter this important trading period in good shape but ever mindful of the fragile nature of consumer confidence and we continue to develop the business, whilst managing it to reflect these conditions. The board remains confident in the outlook for the full year.”

Moss Bros opened it first new format store which incorporates its three core fascias of Hire, Retail and Bespoke in Canary Wharf in May, and it reportedly continues to trade well, and similar stores have now been opened in Liffey Valley, Meadowhall and Bluewater.

A number of test refits are now planned for early 2012 with the potential for a further roll-out to follow across the whole of the group‘s portfolio.

Brick added: “Selective refurbishment of our stores will allow us to leverage specific geographical areas of growth where our offer is strong and the returns compelling.

“We also continue to make good progress with our plans to implement our e-commerce offering and to explore ways of leveraging our customer data.” 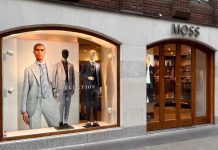