Total sales at chocolate retailer Thorntons declined by 2.7 per cent year-on-year during its third quarter period, according to results released today.

The closure of 11 of its shops over the 16 weeks ending April 28th 2012 negatively affected its overall own store sales which dropped 6.1 per cent to just £29.4 million, but compared to recent quarterly results its underlying sales dip of 1.6 per cent marked a significant improvement.

During the first half of the year own store trading declined by a much steeper 5.5 per cent like-for-like (LFL), however third quarter trading was aided by Easter sales and very soft comparatives for Q3 2011 when LFL sales were down 14 per cent.

Jonathan Hart, CEO of Thorntons, commented: “We saw a good performance at Easter across all our channels and were pleased by our customers‘ response to our new spring seasonal lines.

“However, sales of our all year-round products in the Commercial channel were lower as the difficult consumer environment continues.”

Commercial sales fell 0.9 per cent during the quarter but other smaller division of the business traded well; with franchise sales up 12.6 per cent to £3.1 million and online trading up 7.3 per cent year-on-year.

In June 2011 Thorntons announced plans to close half of its store portfolio in the next three to five years, while at the same time strengthening its commercial, franchise and online arms.

This transition is inevitably proving painful, with these latest results in-line with its expectations of zero profits for the full financial year, but Neil Saunders, Managing Director of analyst group Conlumino, says that these changes are absolutely essential to the future of the business.

“In our view Thorntons‘ remains a company in decline. Its brand is simply less relevant than it once was, its ability to extract a premium for its product has been much reduced and it faces more and much tougher competition on both the retail and the wholesale front,” Saunders said.

“None of this means to say that there isn‘t a future for Thorntons; there probably is. However, that future will be a much smaller company with a lower proportion of sales driven through the retail channel.

“The next couple of years will be about managing this decline and putting the company back on a sound footing.” 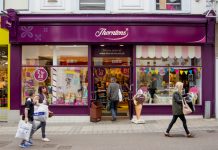