Online sales rose 18 per cent year-on-year in November, passing the £8 billion mark for the first time ever, according to figures released today.

Figures from the IMRG e-Retail Sales Index revealed that customers spent £8.4 billion online in November 2012, an 18 per cent increase on last year‘s figures and the first time in the Index‘s history that spending has exceeded the £8 billion mark in a single month.

Spending was also up 25 per cent on October 2012, with the beginning of the Christmas shopping period being credited for the increase, as well as cold weather which discouraging people from venturing outdoors.

Commenting on the results, Chris Webster, head of retail consulting and technology at Capgemini, said: “These results are particularly strong and give a clear indication of what we can expect to see during the peak shopping weeks in December.

“E-retail continues to be the growth engine of an otherwise struggling retail sector and as online spending exceeds £8 billion in one month, we can see just how integral the online and mobile channels have become to the shopping experience.”

The growing popularity of smartphones and tablets was reflected in the November figures, with a 309 per cent year-on-year increase in the m-commerce sector and a record conversion rate of 2.1 per cent.

Omid Rezvani, eCommera‘s Director of Mobile Solutions, commented: “It is quite clear that mobile transactions are now firmly established as part of the overall consumer purchasing path.

“We have spent much of the year encouraging retailers to embrace the mobile web and the mobile app to ensure that they don‘t become casualties of this transition.” All sectors were performing well in November, but those associated with the festive season saw particularly high growth.

The clothing sector saw its strongest annual growth of 2012, increasing 20 per cent year-on-year as customers updated their winter wardrobes in November.

Online sales figures for December are also expected to be positive as Christmas shopping continues.

Tina Spooner, Chief Information Officer at IMRG, said: “The robust Index performance in November is a clear indicator that festive shoppers are using the internet more than ever before in the run up to Christmas. 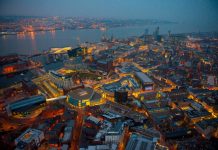