Supermarket Sainsbury‘s has announced that its Director of Online‘s remit has been extended, making it the latest retailer to strengthen its online team as the race for digital dominance continues.

Jon Rudoe will now operate as Director of Online, Digital & Cross-Channel, leading the grocer‘s digital strategy while building growth across its mobile offering.

Joining the Group Development Division, Rudoe first joined Sainsbury‘s in July 2011 from online grocer Ocado where he was Head of Retail.

As competition in the grocery market intensifies, supermarkets are strengthening their operations and seeking to consolidate sales in the online space and results from Kantar Worldpanel yesterday revealed that Sainsbury‘s is leading the way in market share.

In the 12 weeks to March 17th 2013, Sainsbury‘s reported year-on-year growth of 6.2 per cent, maintaining its rising trend while its online grocery business is growing at 20 per cent per year and this latest appointment hopes to further boost the grocer‘s position in a fast-evolving environment.

“Our goal is to make our customers‘ lives easier and deliver the best shopping experience – whether in store, at home or on the go,” said Rudoe.

“There‘s a huge opportunity in this fast-changing part of our business and I‘m excited to take on the challenge.” 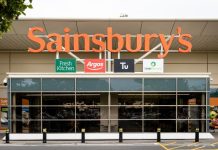