New research has revealed that nearly 70 per cent of British shoppers agree that holding a loyalty card makes them feel more faithful to a particular brand.

Plastic card manufacturer, Plastic Card Services conducted the research and showed that supermarkets rank the most highly for loyalty card use, gaining 74 per of the vote.

Customers‘ use of cards is also on the up, with more than half of those surveyed owning more cards than five years ago, and nearly a quarter holding an average of three cards in their wallet or purse.

The annual ‘Loyalty Pays‘ report, which surveyed 2,000 people from across the country, found that over 44 million people, or 88 per cent of the population own a loyalty card.

A typical shopper will use a loyalty card between one and five times a week, saving between three and five pounds a week, meaning that they could save up to £1,300 in the course of a year. These savings are particularly welcome for higher-value items, with over 56 per cent saving for large purchases.

Rob Nicholls, MD of Plastic Card services said: “In these tough times more and more shoppers are using loyalty cards, and this can have a massive impact for retailers. As the figures show, the deployment of loyalty schemes has a large effect on repeat custom, offering great returns for retailers.” 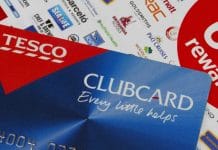