The main transactions in Q4 2014 were the Tiger Portfolio to Lone Star & Ellandi for £265m and Land Securities‘ sale of The Centre, Livingston to Hines/HSBC for £224m.

Seventeen shopping centres were under offer at the end of Q4 2014, totalling £1.12bn including Telford Shopping Centre at £200m and the 50% stake in the Bentall Centre, Kingston-upon-Thames which is under offer for £200m signalling that 2015 will kick off with a very strong start. There are 26 shopping centres being openly marketed totalling £742m and DTZ expect 2015 to maintain these transaction volumes.

It has been a year fuelled by the weight of money targeting the sector. Asian investment represented 17% (£970m) of total market share in 2014, previously unseen in 2013 at 0%. Shopping Centre deals purchased with Asian money in 2014 included Cabot Circus in Bristol, Intu Uxbridge, Hammersmith & Fulham Broadway and The Centre in Livingston.

There is arguably stronger demand in the market for secondary product where investors see most value. Investors have moved up the risk curve which resulted in pressure on dominant secondary yields moving from 7.25% – 8.00% over 2014 to 6.50%/6.75%, whilst secondary yields moved from 8.75%-9.75% to 7.75%/8.25%-. The biggest shift in yields came from the tertiary end of the market where yields moved over 200bps from 11.00% to 8.75%-. All secondary and tertiary yield categories are trending inwards. Barry O‘Donnell, DTZ Head of Shopping Centre and Outlet Investment, said:

“Demand will outstrip supply in 2015 particularly for quality assets . With the return of UK Institutions into the market and better leverage opportunities, we anticipate an active year ahead.”

“According to ONS figures, the volume of retail sales increased 6.4% in November year-on-year, the 20th month of consecutive year-on-year growth. This is the highest increase since May 2004 and was led by department stores and household goods stores. Retailers are still getting to grips with their omni-channel strategies, realising the importance a store plays with the ever increasing click-and-collect channel and helping to fuel occupier demand. In 2014 we witnessed a significant year in shopping centre investment volumes with the £5.83bn transacted trumping the 2013 figure of £4.45bn.” 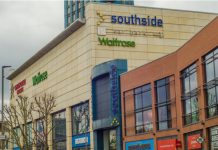