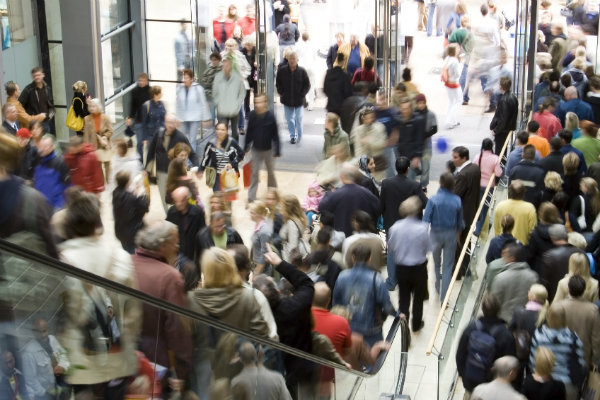 October footfall was 0.4 per cent lower compared to the same month one year ago, but this figure was better than the 0.9 per cent fall in September.

According to the latest Footfall and Vacancies Monitor by the British Retail Consortium (BRC) and Springboard, the footfall rate in October was also the equivalent to the three-month average rate.

The biggest winners in the retail sector were retail parks, which saw footfall grow by 1.1 per cent in October after September‘s minor fall of 0.01 per cent.

On the other hand, the biggest losers were shopping centres, where footfall fell for the ninth consecutive month in October by 1.8 per cent. However, this is an improvement on the 2.5 per cent fall in September.

Remaining quite flat were the high streets, where footfall dropped for the second consecutive month – but the 0.4 per cent fall was marginally better than the 0.5 per cent fall in September.

READ MORE:  Retail sales in October the best since January

“However, the picture is mixed across the country – while most areas saw a decline in shopper numbers, the north and Yorkshire region showed a 0.5 per cent year-on-year increase,” she said.

“Interestingly, October‘s BRC-KPMG Retail Sales Monitor showed a 1.7 per cent increase in like-for-like sales growth across the country, which perhaps suggests that shoppers may still be prepared to shell out for a bargain, but they are increasingly doing so from their laptops or mobile devices.”

Springboard insights director Diane Wehrle said the “slight strengthening” of footfall in October showed that any worries about economic uncertainty were not yet having an impact.

“Much has been made of the rise in clothing sales in October, however, the ongoing drop in daytime footfall demonstrates challenges in attracting shoppers to bricks and mortar stores,” she said.

“And whilst a boost in luxury sales due to the weak pound has been widely reported, this is not reflected in increased footfall as it is driven by higher value purchases.”

READ MORE:  Retail footfall drops across the board with shopping centres hit hardest

This fall in the vacancy rate came after two quarters of consecutive growth, and remains well above the January low of 8.7 per cent.

Dickinson said this was further evidence of the volatility of the retail property market.

“Once again, the north and Yorkshire as well as Northern Ireland are welcoming more stores in their high streets, but the vacancy rate in Scotland has spiked to 9.2 per cent from 7.5 per cent in July.

“We will watch this trend carefully, but there is some suggestion that landlords are welcoming retail tenants on shorter leases.

“While this could be good in the short term for retailers needing more flexible arrangements, it also bears witness to a lack of long-term stability in many areas.”

Wehrle said the stable footfall trend over summer would‘ve contributed to the improvement in the vacancy rate.

“The vacancy rate also improved at the same time last year and so, to some degree, this is driven by an increase in short term lets in the run up to Christmas,” she said.

“In order to avoid the same pattern of an increase in vacancies post-Christmas repeating itself, it is critical for retailers – and retail destinations – to deliver the best in class in terms of both price and experience.”