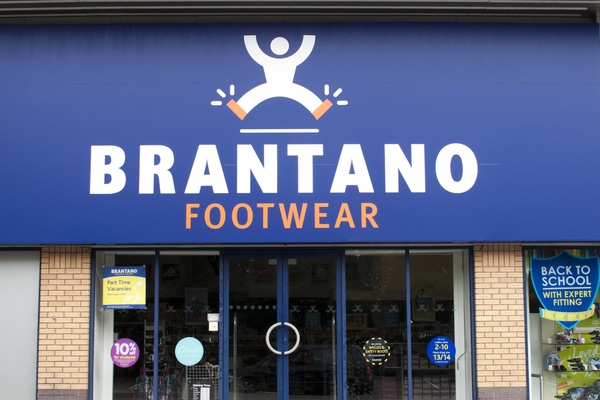 Footwear chain Pavers is set to move into and rebrand four Brantano shops, which recently entered into administration.

Brantano collapsed after it failed to find a buyer to rescue the chain, putting the future of its 73 stores and 1086 staff in jeopardy.

The four shops that Pavers has picked up are in Bournemouth, Lincoln, Newport on the Isle of Wight, and Newton Abbot in Devon.

Forty-five jobs have been saved as a result of the takeover.

“We have recently made it clear that Pavers is embarking on a period of strategically planned and focused growth,” Pavers managing director Stuart Paver said.

“This opportunity fitted perfectly into our expansion plans, allowing us to move into a select number of areas within the UK where we are currently under represented.

”Importantly the jobs at all four stores will be saved.

“We expect to rebrand these stores and be trading within 6-8 weeks, bringing comfortable, stylish, and good-value footwear to everyone locally.”

Tony Barrell and Mike Jervis of PwC were appointed as joint administrators of Brantano on March 22.

”We continue to trade the rest of the stores and concessions, whilst engaging in ongoing discussions with interested parties about the potential sale of further parts of the business,” Barrell said.

Earlier this month, Brantano made 34 of the 71 head office jobs redundant as part of the administrations process.

This is Brantono’s second administration in as many years, having fallen into a similar state in January 2016 before being bought by Alteri Investors a month later for £12.2 million.

Jones Bootmaker, which was also owned by Alteri Investors, was bought in a last minute pre-pack deal by private equity firm Endless, after it looked dead set on being another casualty just days after Brantano collapsed.