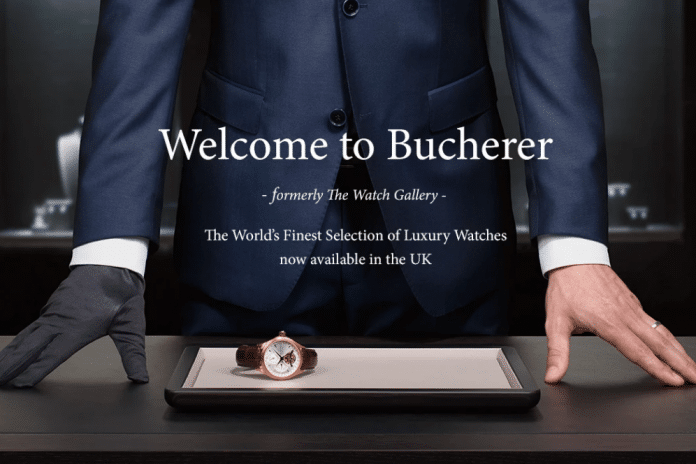 At thousands of feet in the air, on a few hours’ sleep and even less caffeine, one thing was apparent as I peered over the countryside on my descent into Zurich airport: every single thing in Switzerland, from roads to hedge rows, is immaculate.

This level of attention to detail was of course part of the reason for my journey. I was on my way to the lakeside town of Lucerne for what was described by its director as “probably the most important watch shop in the world”.

The black and bronze exterior of Bucherer’s flagship store in Lucerne will soon make its way to London. In March this year, one of Europe’s largest watch retailers Bucherer bought The Watch Gallery, a designer watch retailer based in London which also runs Selfridges’ coveted “Wonder Room”.

For an international retailer established over 125 years ago, few outside of the fine watch community in Britain are aware of Bucherer’s existence, a fact that The Watch Gallery’s chief executive David Coleridge well is aware of.

“The name is not known at all in the UK… the unprompted familiarity would be zero,” he said.

Despite the fact that his five retail stores in the UK are in the process of being rebranded into a name few of the general public will recognise, Coleridge remained largely unfazed.

Instead, his focus remained on maintaining his stores’ relationship with their customers.

“It’s a very long-term process. It’s about that relationship between the individual staff and the customer and then the company,” he said.

“It’s funny, we sometimes ask our customers and they forget our name. But they’ll know the name of the staff member they’re dealing with.

“People come to London to visit London, they don’t come to buy a watch, it’s secondary”

“Our number one priority is not to disturb that, but to enhance that. We can offer them more now.

“We’re constantly conscious that you can buy Rolex in 16 locations in London, we have four of them but there is a lot of choice there. The only reason to come and buy from us is the underlying value of customer service.”

It is this understanding of customer service which brought the two companies together.

Although Coleridge freely admits that Bucherer was always top of his “fantasy list” of buyers, the Swiss retail giant took over a century to make the jump to the UK.

According to Bucherer’s chief executive Guido Zumbühl, it was because of their company’s alignment that he finally decided to cross the English Channel.

“It was always difficult to get the right brand really,” Zumbühl said.

“This time I think it fits very well. Also, I think the culture is very close to the Bucherer culture and it makes it much easier.

“The value for Bucherer is to get more international and I think in London, of course we will have a lot of local powerful customers.”

In its native Switzerland, Bucherer could afford to be passive in terms of promotion. Bus after bus of Chinese tourists continually flock to its flagship store in Lucerne, often spending thousands per person.

Zumbühl said that from May through to October, the number of Chinese tourists reach “about 3000 a day” – adding that “the season is quite long”.

Despite The Watch Gallery’s success, Bucherer will not be afforded this luxury off the bat in London.

Although tourism has become a key economic driver in London since the fall of the pound, tourists do not come specially to buy watches.

“Being a retailer in central London is slightly different from in Switzerland, the basic principles are the same but people come to London to visit London, they don’t come to buy a watch, it’s secondary,” Coleridge said.

“That interest in buying watches dramatically increased because of currencies, because of a perception that London is a cheap place and a good place to shop generally.

“London’s an interesting market because, in the watch business, the trend is that brands have fewer shops today than three years ago, and in a few years’ time they’ll have even fewer.

“To open new doors is quite a challenge, without actually taking over someone else’s shop. There’s real opportunities to make bigger better shops and more attractive destinations for the customers.”

Expansion far beyond The Watch Gallery’s estate could take some time though, as Zumbühl intends to stay in line with his considered and laid-back approach to growth.

“We are constructing in Westfield, we’ll make it double the size,” he said.

“We have a project in Selfridges, an initial project for jewellery. We are open to expand. The first step I think is we have to integrate we have to rebrand, it’s quite a lot of work.”

Aside from the prime locations it will now call home, Bucherer has a unique status granted to few retail brands.

An example is the Blue Edition range, a collection of watches made exclusively for Bucherer emblazoned with its signature blue.

Top-shelf watch brands like Audemars Piguet, Tudor, IWC, and Piaget have produced watches for the range, which will be available in the UK this month.

Whether Bucherer chooses to keep to its characteristically passive marketing stance or opts for a more proactive strategy, it could soon become a staple in London’s luxury retail scene.