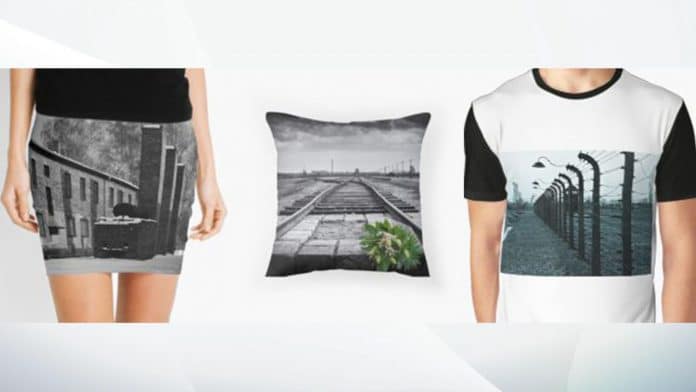 Redbubble has been criticised by the Auschwitz memorial, customers, as well as social media users for selling pillows, t-shirts and miniskirts that feature images of the former Nazi concentration camp.

The online retailer, which is considered a “global marketplace” where users can sell their own merchandise with selected prints, featured dozens of products with Auschwitz images on them.

Many users took to social media to express their concerns over the controversial images where the screenshots were posted.

The Auschwitz Memorial Twitter page tweeted at Redbubble yesterday and said: “Do you really think that selling such products as pillows, miniskirts or tote bags with the images of Auschwitz – a place of enormous human tragedy where over 1.1 million people were murdered – is acceptable?”

Redbubble has since replied.

“We appreciate that this has been brought to our attention,” the retailer said.

“The nature of this content is not acceptable and is not in line with our community guidelines.

“We are taking immediate action to remove these and similar works available on these product types.”

It added: “Redbubble is the host of an online marketplace where independent users take responsibility for the images they upload.

“We have onsite reporting functions in place and are grateful to be made aware of these concerns.”

Meanwhile, Redbubble faced backlash by an influx of Twitter users as images of the products circulated online.

Disgusting you should remove this.

Although the products are no longer available for purchase, many were still listed on Redbubble’s official website at the time of print.

Pillows with the image of the camp’s entrance have been priced for up to £55.

Redbubble is the latest retailer to face backlash and criticism for featuring products of controversial nature.

Earlier this year, Prada and Gucci were embroiled in a blackface scandal earlier, while Burberry featured a noose hoodie at London Fashion Week back in February.

All three luxury retailers apologised over the respective incidents.