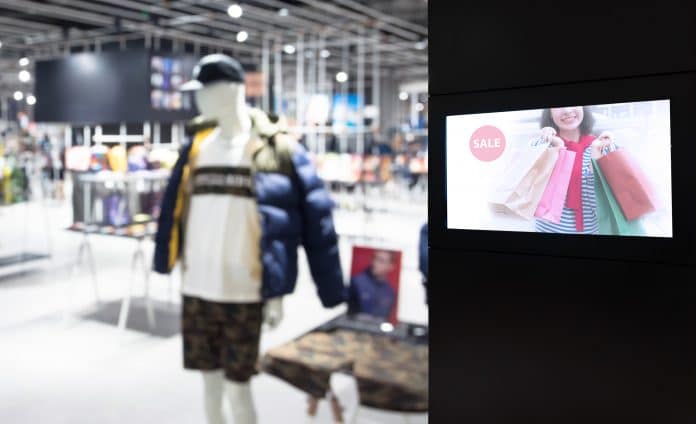 Significant AV deployments are on trend in UK retail right now, and several big-name retailers and brands joined Retail Gazette and AVIXA for breakfast in London to discuss why.

From Asda George’s commitment to digital signage in its new-look superstores to JD Sports’ plans for window displays in its mooted Times Square store in New York, UK retailers are imagining their future through an audiovisual (AV) technology lens.

EE’s new format retail space, Dixons Travel’s airport shops, and Primark’s largest ever store, which opened in Birmingham in April, are also among those which have gone heavy on AV fittings, as they look to make their physical spaces stand out.

Whether it is for wayfinding, marketing, merging the in-store and online experience for customers, or to enhance the general atmosphere, retailers are finding reasons to implement a range of technology in the drive to attract more customers and create compelling places that people want to visit.

Representatives from Arcadia, Costa Coffee, Gensler, Hermès, John Lewis, Made.com, Sainsbury’s, and Wickes, gathered for breakfast in London at the end of April to discuss how AV is deployed in their respective businesses. The event, entitled ‘Embracing AV Technology to Fuel Retail Growth’, was run by Retail Gazette in association with trade organisation AVIXA, the Audiovisual and Integrated Experience Association. It investigated where, why and how AV investment is currently directed, and what its influence on the future of retail could be.

It is no secret the role of the store in retail has changed in a digitally-influenced age. The look and feel, and additional features such as cafes, charging stations, water fountains, and hairdressers – all present in the aforementioned Primark – exemplify this evolution.

And as retailers attempt to merge their in-store and online operations, various kiosk, touchscreen, and handheld technology devices are becoming more commonplace in shops and shopping centres around the globe.

“The reason there is such focus on developing new-look stores and continued talk about the importance of customer experience in stores is because the way consumers are choosing to shop now is so different to even the recent past,” explained Ruth Wassermann, design director at Made.com, an online furniture retailer with showrooms in major cities around the world.

“People are going into fewer stores because they know what they are visiting the shops for, thanks largely to the availability of information online. Because people don’t always need to go into a store to buy the product they want, retailers must make their physical spaces a destination to pull in the crowds.”

Addressing delegates at the roundtable, she added: “Stores need to be places where shoppers can connect with a brand. They are no longer just a platform for transactions.”

Retailers are recognising that AV technology can play a central part in this process, with concept, new format and pop-up stores from the likes of Amazon, H&M and Ikea opening in the UK last year, all featuring a significant array of technology touchpoints.

Lara Marrero, principal & strategy director, and global retail practice leader at Gensler, and a participant at the roundtable, said retailers have been on a journey when it comes to how to use technology in their stores – and it’s a journey that continues to evolve.

“When it comes to engaging customers, digital needs to be fit for purpose,” she commented.

“In general, digital is moving away from ‘the wow digital wall’ and towards ‘digital in service’, in an effort to assist the sales process to improve engagement between the brand, its employees, and its customers.”

Marrero added: “AV installations are a great way to create buzz around a product launch or a new feature, but should be seen as installations and not permanent features of a store to ensure there is no content fatigue. Ultimately, where possible, brands should take advantage of the smartphone that shoppers already have attached to their hand, whether it be for mixed or augmented reality experiences, to access product information, or to control what music is playing in a fitting room.”

These businesses have seemingly drawn up a blueprint to follow for the likes of Primark, JD Sports, and Asda George, which have either recently opened or are soon to launch stores with AV at the core.

But, according to conversations at the breakfast event, there are other important factors to take into account.

The suggestion that retail will soon become like the 2002 film, Minority Report, where personalised offers are triggered on big screens and digital displays based on iris scans and facial recognition was rebuffed. The direction of travel in biometric technology and data gathering by retailers suggests there will be elements of this type of customer interaction in the future, but for the UK retailers present it won’t permeate the sector.

Tesh Chauhan, an independent senior design consultant, but until recently a senior design manager at sandwich chain Pret a Manger, was one roundtabler who argued the future of retail is unlikely to resemble that particular film. Instead, he envisages more subtle deployments of AV having a greater impact on the high streets of the UK.

“We felt that Pret being a humanised brand with customer engagement being key, LED screen menus would be overpowering,” he noted, explaining elements of the design strategy at his ex-employer.

“We decided to go down a more subtle route with sophisticated projectors that emitted white light to create crisp legible text. This allowed us to change menu content throughout the day.”

He added: “The only moving element is the second hand on the projected clock that swept around smoothly. The panel used itself is a wooden surface adding to the warm, natural aesthetic.”

Naturally, content is a crucial concern in the AV investment decision. There was a general consensus around the table there is is no point deploying AV in all its guises if the content displayed on it does not have a suitable impact. Delegates said retailers that wish to use AV in stores must ensure their content, tech and design teams are aligned, with the former having a particularly vital role in developing compelling material.

Another key argument raised at the roundtable was, even though retailers have their own specific audiences to market to, there is no one type of customer. It means retailers often need to be “all things to all people, which makes design a complex process”.

Brad Grimes, senior director of communications at AVIXA, and one of the roundtable participants, argued it is not easy for retailers to find the right mix of AV technology that works for their specific stores and audience. But the commercial benefits of getting it right are substantial, so it must be explored as they map out future store plans.

“Retailers might find it challenging to measure their return on investment in AV technology, but customers will be sure to tell you when it is not present in store,” Grimes commented.

“It’s different per sector, but people certainly notice in-store technology gaps or the lack of atmosphere when audio is not utilised to its potential. All of this means it can be difficult for retailers to get the balance right.”

He added: “Successful retailers have a common approach to AV installation. Be it digital displays, video walls, sophisticated lighting, precision audio, digital wayfinding, or central control systems to manage it all, winning retailers are introducing technology in cross-functional teams to ensure the investment has commercial benefits across departments.

“The less siloed a retailer is, the better AV will land. And businesses need to get to the point where they are agile enough to try new things in their stores, reverse their decision if it doesn’t work, and adopt fresh approaches to cater for demanding shoppers.”

For more information on audiovisual technology in the retail environment, visit www.avixa.org/retailAV

The importance of supply chain integration to multiple channel strategies

Digitisation boost in retail thanks to COVID-19?