Ted Baker has ended its solo efforts to break into the Japanese market after it signed a five-year retail partnership deal with Sojitz Infinity.

Effective from October 1, Sojitz Infinity will drive the long-term expansion of Ted Baker in the region, combining its local expertise in the department store sector with Ted Baker’s buying, merchandising and brand-building expertise.

As part of the deal, Ted Baker will transfer certain existing assets relating to Sojitz Infinity – including existing non-current stock, fixed assets and leases – at nil value to support the successful transition of the operations.

This means Ted Baker’s existing directly-operated business will convert into an exclusive retail licence for the Japanese market.

“We firmly believe that Japan has the long-term potential to be an important market for the Ted Baker brand,” Ted Baker chief executive Lindsay Page said.

Sojitz Infinity boss Kohei Ono said: “Our knowledge and experience in building fashion brands through stores, concessions and online should add value to Ted Baker and we look forward to working together.” 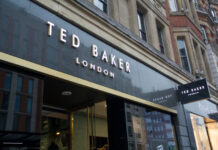 Ted Baker to cut 500 jobs across retail and HQ