// Only 2/5 shoppers are willing to pay more for recyclable packaging.

Consumers have demanded action from manufacturers and retailers rather than from governments to tackle plastic pollution.

A new international survey explored 65,000 people’s attitudes towards plastic use, and how this shift in attitudes was affecting their relationships with brands.

The research from Kantar Worldpanel in collaboration with GfK and Europanel revealed that only 19 per cent believed they should be taking personal responsibility for their plastic waste.

Meanwhile, 48 per cent expected manufacturers to pave the way for tackling the issue.

It went on to say that only a fifth of global consumers were making a conscious effort to reduce their impact on the environment and almost half were ignoring the issue altogether.

Kantar created four customer segments to categorise consumers in its study – reporting on the claimed frequency of actions to reduce waste.

Sixteen per cent of global consumers were Eco Actives – shoppers that consciously aim reduce their volume of plastic waste.

They were more than twice as likely than the Eco Believers to perform environmentally conscious actions regularly.

With 80 per cent avoiding the use of plastic bags, 75 per cent cut down on single-use plastic drinks bottles and 66 per cent avoid products in plastic packaging.

According to the study, Eco Actives were to be much older than other groups.

Over 50s were 17 per cent more likely to be in this group and under 30s were 20 per cent less likely.

They also made up a fifth of total FMCG spend in the UK alone—suggesting those that with more free time to prepare alternatives were leading the sustainability movement.

Kantar’s findings said that 43 per cent of consumers thought retailers needed to take action in reducing the amount of plastic in the fresh and chilled aisles.

Thirty nine per cent thought plastic bags for vegetables should be removed.

However, only two in five shoppers were willing to pay more for the recyclable packaging.

“With Eco Actives making up 16 per cent of all shoppers globally, it’s clear that taking action on plastic waste needs to be a case of ‘when’ rather than ‘if’ for manufacturers and retailers,” Kantar director Natalie Babbage said.

“The onus is on manufacturers to offer competitively priced sustainable options, and on retailers to take steps to remove packaging from products and push reusable bags.

“By taking these steps now, clients can unlock the opportunities of environmental concern and play a vital role in shaping the future of our planet.” 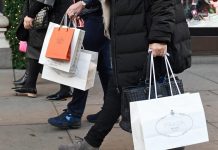