Tax free shopping experts have revealed that the UK is the leading European destination of Chinese shoppers expected to visit during Golden Week.

Golden Week, taking place between October 1-7 this year, is the name of a semi-annual national holiday period in China.

During the week there is expected to be a four per cent surge in Chinese shoppers.

Global Blue attributed this to shoppers wanting to try to make the most of Golden Week ahead of the Brexit deadline of October 31.

This year has already seen an increase of Chinese shoppers visiting the UK compared to last year  – with July seeing a eight per cent growth and August a 10 per cent year-on-year.

Global Blue added that October 2018 saw a 11 per cent drop in Chinese shoppers in comparison to the particularly strong 2017 data. 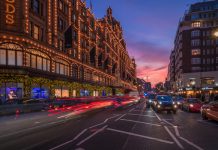