// Chinese transactions forecast to drop by 7%

New research has predicted that shoppers from the US and Russia will help boost the UK economy with their shopping habits.

In the run-up to Christmas, tourism shopping tax-refund company Global Blue forecast a 14 per cent increase in tax-free transactions from US shoppers and a seven per cent increase from their Russian counterparts.

Since the devaluation of the British Pound, the US Dollar has strengthened, and American spend has been driven by income tax reductions, which have given them more disposable income.

In contrast, Chinese transactions are forecast to drop by seven per cent over the “golden quarter”. 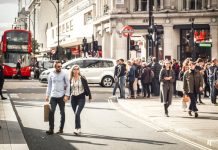