// She has been at the helm for four years

Hubbard is set to depart at the end of June after four years in the role, after which there would no women at the helm of FTSE-listed retailers.

Card Factory said it would immediately begin searching for her successor.

In the interim, the retailer’s current chairman Paul Moody will take over as executive chair, with an additional £30,000 per month fee added on top of his normal £144,000 chairman fee.

According to Card Factory, Hubbard “implemented a solid platform for future growth, recruited a strong executive board, overseen entry into new channels and markets and led the development of the refreshed strategy which is now more relevant to the market and macro-economic environment we face today”.

However, as part of the new strategy, it was agreed that now would be “an appropriate time to transition to new leadership committed to the longer term successful implementation of the next phase of the group’s return to growth”.

Card Factory is set to unveil its “refreshed growth strategy” on July 28.

Meanwhile, Hubbard will be on garden leave from June 30 until the end of her employment, which is thought to be sometime in December, and will assist with the handover during that time.

Moody said: “The board would like to thank Karen for her important contribution to the company, made with passion and commitment, over the last four years.

“The group has a strong customer proposition, the correct strategy for the next phase of development and a highly capable leadership team to deliver it.”

Hubbard said: “I am incredibly proud to have led Card Factory over the past four years and to work with the exceptionally talented people that make Card Factory the great company that it is.

“Together we have undertaken a significant transformation across the organisation to support its future success. The refreshed strategy will provide a strong foundation for the future.” 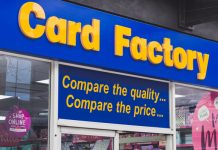