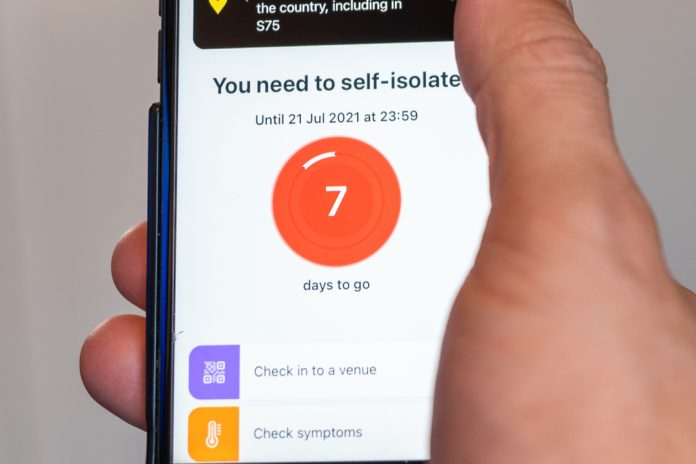 // More than 500,000 people in England and Wales were asked to isolate by the NHS app in the week up to July 1

The BRC has urged the government to ensure staff in retail stores and suppliers should be allowed to work even if they receive an NHS Covid app ping alert to self-isolate.

It follows reports that grocery and food supply chains are “starting to fail”, and several retail shops have complained about having to close, because of the the number of people being “pinged” by the NHS Covid-19 app to self-isolate after being exposed to Copvid-19.

The phenomenon is becoming known as the “pingdemic”, and Prime Minister Boris Johnson today apologised to businesses for the “inconvenience” but told them to stick with isolation rules after confusion was sown by his own ministers.

READ MORE: What should I do if I was ‘pinged’ and can’t go to work?

In the face of widespread criticism over staff shortages as Covid-19 cases soar, Johnson this week announced a plan for a “small number” of critical workers to be able to continue their functions.

The latest figures show more than 500,000 people in England and Wales were asked to isolate by the NHS app in the week up to July 1.

Johnson urged people to stick with the rules until they change because “isolation is a vital tool of our defence”.

“Government needs to act fast. Retail workers and suppliers, who have played a vital role throughout this pandemic, should be allowed to work provided they are double vaccinated or can show a negative Covid test, to ensure there is no disruption to the public’s ability to get food and other goods.

“With community cases soaring, the number of healthy retail staff having to self-isolate is rising fast, disrupting retail operations.”

On Monday, Johnson resisted calls from businesses struggling to cope with reduced staffing levels by declining to introduce a more wide-reaching change to quarantine rules ahead of August 16, when a testing regime will replace the requirement for fully-vaccinated contacts to isolate.

He has suggested an exemption would cover some in hospitals and care homes, or working in the supply of food, electricity and medicines, and transport, defence and borders.

However, the government has said there is no “blanket exemption for any sector or role” and decisions will be made largely on a case-by-case basis.