// Patisserie Valerie auditor Grant Thornton has been fined £2.34m after investigation by FRC

Patisserie Valerie auditor and accountancy firm Grant Thornton has been fined £2.34 million after an investigation found a “serious lack of competence” in its audits.

Grant Thornton failed in their main job of checking that financial statements were “free from material misstatement, whether caused by fraud or error”, the accountancy watchdog found.

The audits carried out in 2015, 2016, and 2017 gave Patisserie Valerie a clean bill of health – before it disclosed potential fraud in 2018 and subsequently collapsed, resulting in the loss of 70 stores and more than 900 jobs.

Grant Thornton “missed red flags” and failed to question information provided by management, according to findings by the Financial Reporting Council (FRC).

The FRC decided on a sanction of £4 million for Grant Thornton, but lowered the sum after the company admitted its behaviour.

It also issued a “severe reprimand”, ordered the firm to pay legal costs and ordered annual updates on how it is working to fix the problems behind the failure.

The FRC found that in each of the three audits there were “serious breaches… often repeated year on year”.

Grant Thornton said it would continue to defend a legal claim against it by Patisserie Valerie’s liquidators. 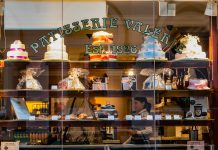