Eric Pickles opened the “first ever Whitehall pop-up shop” in the headquarters of the Department for Communities and Local Government this morning in a bid to encourage start-up businesses and regenerate high streets.

The shop, set up inside the department‘s Victoria-based offices, was opened by Communities Secretary Eric Pickles and Local Growth Minister Mark Prisk and has the support of national enterprise campaign StartUp Britain.

Over the next year the shop will provide affordable retail space for more than 150 new British retailers, with six new start-up businesses moving in every fortnight in a model that ministers hope high streets across the country will emulate.

Commenting on the scheme, Mr Pickles said: “We are absolutely determined to support the high street and we know pop-ups are a great way to bring empty shops back to life and get new businesses going, so we thought why not open one right here in the department in time for Cardinal Place shoppers to get their Christmas goodies.

“It will also showcase how we can unleash more of our best and brightest young entrepreneurs onto this country‘s high streets.”

Mr Prisk is keen for this scheme to be replicated across the country and has written to the British Property Federation to encourage support from landlords. Changes to planning restrictions which will allow landlords to alter how an empty shop is used for up to two years are also designed to garner support for pop-ups.

The 330 towns which are involved in the Town Team Partners programme will receive support to set up their own pop-ups, while all towns can take advice from a pop-up tool kit published today by StartUp Britain and a guide to opening a pop-up which will be published soon.

450,000 people set up new businesses last year and the £80 million of start up loans which the government is providing to young entrepreneurs could mean that another 30,000 will be created.

Almost two thirds of new entrepreneurs are keen to start trading on the high street, believing that this would benefit their businesses.

Claire Lissman, part of the duo behind Arthur & Henry, said: “We‘re thrilled and delighted to have this opportunity.

“For a newly established, ethical menswear brand, this is an amazing opportunity to meet customers face to face.” 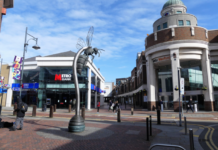 Toys R Us questioned by Work and Pensions Committee as pensions...