The leading 50 payday lenders have been given 12 weeks to correct their business practices by the Office of Fair Trading (OFT) or run the risk of losing their licences after “widespread irresponsible lending” among the firms was uncovered, it has been announced today.

Areas of non-compliance among the 50 identified lenders, which account for 90 per cent of the payday market, include failing to conduct “adequate assessments of affordability”, failing to adequately explain how debts will be collected, using “aggressive” collection practices and not treating vulnerable borrowers with “forbearance”.

Payday lending is a £2 billion sector which has thrived during the difficult economic climate with the likes of Wonga and QuickQuid advertising their services widely, though the regulator warned that such companies are a top enforcement priority as vulnerable customers with limited alternatives are subject to high rates of interest.

Lenders often distort incentives such as ease of access and speed of payday loans and rely too heavily on customers who fail to repay their loan in time as well as rolling over or refinancing loans, the OFT noted , adding that it is set to refer the payday lending market to the Competition Commission for further investigation.

“We have found fundamental problems with the way the payday market works and widespread breaches of the law and regulations, causing misery and hardship for many borrowers,” explained OFT CEO Clive Maxwell.

“Payday lenders are earning up to half their revenue not from one-off loans, but from rolled over or re-financed deals where unexpected costs can rapidly mount up.

“We are proposing to refer this market to the Competition Commission, which has wider powers to get to heart of the problems in this market and to identify and impose lasting solutions that protect consumers.

‘Irresponsible lending is not confined to a few rogue payday lenders – it is a problem across the sector.

“If we do not see rapid, significant improvements by the 50 lenders we inspected they risk their licences being removed. Payday lending is a top enforcement priority for the OFT.”

Such lenders could also face advertising restrictions from the Advertising Standards Authority and the Government under new plans announced today by Consumer Minister Jo Swinson.

Swinson said that the Government‘s clampdown would be immediate and added: “The evidence of the scale of unscrupulous behaviour by payday lenders and the impact on consumers is deeply concerning.

“The Government is committed to tough action to tackle these problems.

“The OFT enforcement action will stop payday lenders taking advantage of those in financial difficulty.

“In April 2014, we are giving responsibility to regulate this industry to the new Financial Conduct Authority (FCA), who will have more rigorous powers to weed out rogue lenders.” 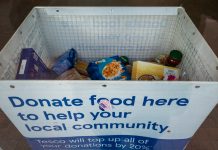 Cost of living: Should supermarkets be stepping in where the government has failed?