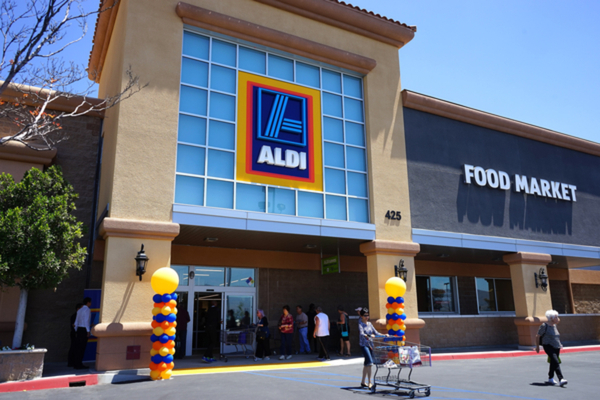 German discount grocer Aldi has lived up to predictions it would overtake Co-op to become the fifth largest supermarket in the UK.

New results from Kantar Worldpanel indicate that Aldi‘s sales grew by 12.4 per cent in the 12 weeks to January 29, boosting its market share to 6.2 per cent

“Just a decade ago  Aldi  was the UK‘s 10th largest food retailer, accounting for less than two per cent of the grocery market,” Kantar Worldpanel‘s head of retail insight Fraser McKevitt said.

“Since then the grocer has grown rapidly, climbing the rankings by an impressive five places to hold a 6.2 per cent market share.

“Underpinned by an extensive programme of store openings, the past quarter has seen Aldi attract 826,000 more shoppers than during the same period last year.”

Although it lost its place to the discounter, Co-op posted a two per cent sales increase marking continual growth since July 2015, driven by a seven per cent rise in its own label sales.

Among the Big 4 grocers, the best performer was Morrisons which saw a 1.9 per cent growth in sales and an increase in market share for the first time since 2015.

Amid a surprise merger with supply chain giant Booker, Tesco posted continued sales growth of 0.3 per cent. This was slower than its previous rate, and its market share has been ebbed away 0.4 per cent compared to last year.

Market share was also chipped away at Sainsbury‘s by 0.3 per cent, while sales remained flat.

The wider picture shows eight out of nine of the UK‘s top supermarkets showed growth, with Waitrose growing its market share by 0.1 per cent alongside Lidl‘s increase of 0.3 per cent.

Overall, supermarket sales were up 1.7 per cent compared to 2016, despite supply issues with fresh produce.

“Meanwhile rising prices,  which we saw at Christmas for the first time since 2014, have continued into the new year, with like-for-like inflation on a basket of everyday groceries climbing to 0.7 per cent.

“If prices continue to rise at the same rate for the rest of 2017, shoppers will find themselves around £27 worse off.”

Data from Nielsen shows that in the four weeks to January 28, the volume of groceries sold fell by 2.7 per cent.

“A better indicator is the last three weeks, during which till takings were up 0.3 per cent.

“We anticipate the industry to grow around 2% this year, an improvement on 2016, primarily due to the return of cost price inflation after three years of deflation and the depreciation of sterling, yet grocery spend remaining robust despite price rises.

“The discounters will continue to grow faster than this due to the acceleration of new store openings which could push their market share to 13% for the first ever time.”