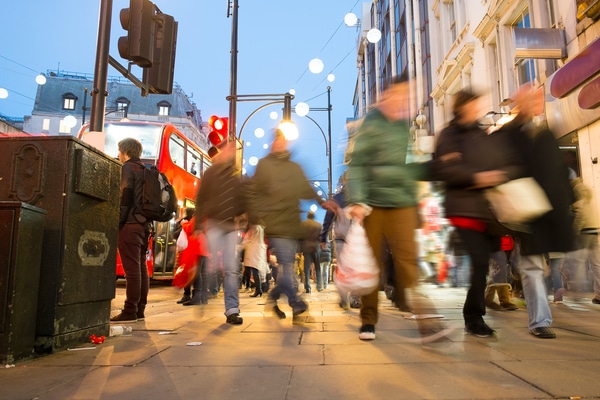 High street footfall was in decline for a third consecutive month throughout September, as businesses struggled to invest in their store propositions.

According to Springboard and the British Retail Consortium (BRC), footfall dropped 1.2 per cent in the five weeks to September 30, matching August’s decline as well as the three-month average, but coming markedly below the yearly average of a 0.4 per cent decline.

Shopping centres’ footfall decline jumped from 0.8 per cent in August to one per cent.

Meanwhile, retail parks saw growth once again, yet growth slowed by 0.5 per cent to 1.6 per cent in September.

Northern Ireland suffered the sharpest drop in footfall in the UK, dropping 4.3 per cent, while the south west of England and Greater London recorded a 2.4 per cent and 0.9 per cent drop respectively.

Scotland also saw its most significant decline since June 2016, dipping two per cent.

The east of England once again pulled ahead, seeing growth of 1.9 per cent and was the only region to see positive growth on the high street at 0.4 per cent.

“September’s sales rose due to inflation, but the accelerating decline in footfall is a strong indicator of consumers railing back spending,” Springboard insights director Diane Wehrle said.

“Much is often made about the impact of weather, but with similar weather conditions to September 2016, this cannot be put forward as a driver.

“Aggressive early season sales indicate retailers are spooked, and they will be on edge with the six-week countdown now on to the start of the festive shopping season.”

BRC chief executive Helen Dickinson added: “There’s an urgent need to stall the growing number of retail locations, particularly in more vulnerable parts of the country, falling further and further behind by attracting shoppers to retail destinations with the right mix of products, experience and convenience.

“But this is where the conundrum lies for retailers: the growing cost of doing business leaves little to no wiggle room for investment in their store proposition.”