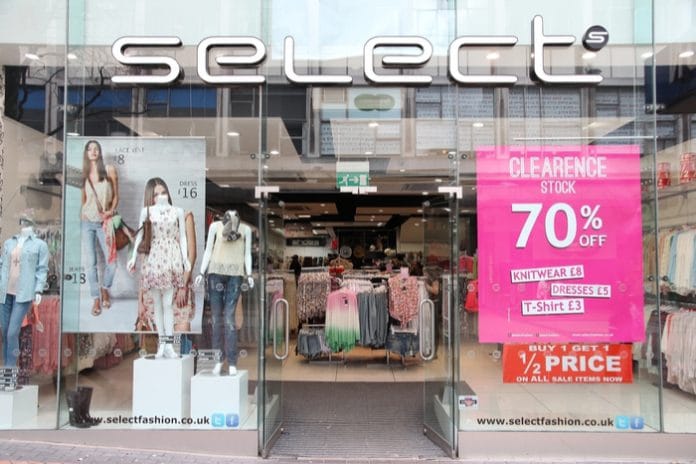 Select has officially fallen into administration, placing 1800 jobs at risk of redundancy if a new owner does not buy the fashion retailer.

It also marks the second time that Select has fallen into administration, and it comes after it underwent a CVA process in April last year.

2000 jobs at risk as Select readies for administration

Andrew Andronikou, Brian Burke and Carl Jackson of advisory firm Quantuma, were appointed as joint administrators on May 9.

Quantuma said prevailing high street conditions Select was unable to sufficiently deliver on a turnaround plan it had embarked upon.

In a statement, Andronikou said: “Due to ongoing financial difficulties, I can confirm that Brian Burke, Carl Jackson and I have been appointed joint administrators of Genus UK T/A Select.

“We will continue to trade Select whilst we assess all options available to the business, with the aim of achieving the optimum outcome for all stakeholders.

“Options include a sale of the business as a going concern, in addition to entering into discussions with those parties who have already expressed interest in acquiring the business.

“We will also be assessing CVA proposals that have been put forward by the directors.”

Quantuma said Select, which is owned by Turkish entrepreneur Cafer Mahiroğlu, employs around 1800 staff and has around 169 stores.

No redundancies have been made as a result of the administration but job cuts could be on the horizon if a sale of the retailer is not agreed.

It comes after Select filed a notice of intention to appoint administrators at the High Court last month.

When Select took out a CVA last year, it managed to cut its rents by up to 75 per cent and saved nearly 2000 jobs.

Select came under Mahiroğlu’s ownership in 2008 when he bought the fashion chain out of its first administration.