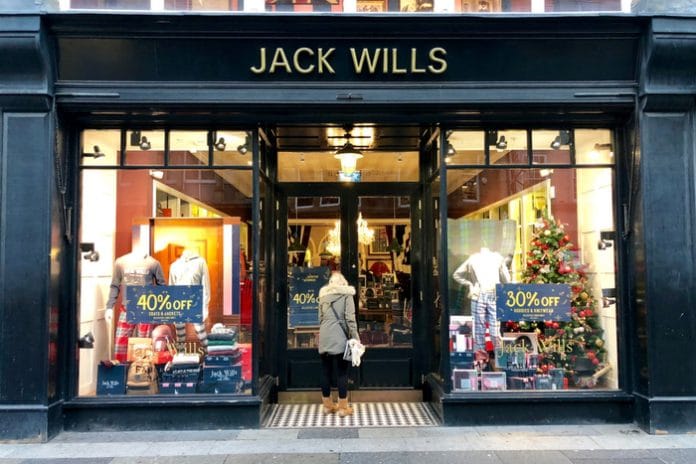 Founded in 1999 in Salcombe, Devon by two friends Peter Williams and Robert Shaw, Jack Wills has garnered a reputation as the epitome of modern British fashion.

The fashion retailer set out to sell preppy attire at mid-market prices, something which enticed young consumers in the early 2000s. Compared to other preppy clothing retailers such as Tommy Hilfiger and Ralph Lauren, Jack Wills’ prices were more accessible.

However, in recent times, the retailer has been enduring decline – which it attributed to the weakened sterling and ever-changing consumer behaviours. But earlier this year, things took a turn when it laid bare the challenges it has been facing amid wider a decline in the UK retail industry.

According to accounts filed at Companies House in March, Jack Wills revealed that for the financial year to January 28 2018, it swung to a pre-tax loss of more than £14 million, before one-off costs. This compares to a profit of £2.2 million the year prior.

It also posted an EBITDA loss of £7.5 million in the period, compared to a profit of £6.3 million in the previous year. Meanwhile, sales declined by 1.1 per cent to £129.3 million thanks to a “challenging year”.

“Jack Wills’ offer feels out of sync with the times”

At the time, the company had reconfirmed a £25 million revolving credit facility, £4 million trade finance facility and £1.8 million overdraft with HSBC until January 2021, and owner Bluegem Capital pledged to offer financial support for at least a year.

Since then though, speculation has been rife that Jack Wills was running short of cash after burning through more than £20 million injected by private equity owner BlueGem. The retailer’s lenders were also warned they could be left £30 million out of pocket if Jack Wills fails to find a buyer to take over the business – a process it kicked off earlier this month.

Advisors from KPMG, who had been drafted in to review the fashion retailer and look at future opportunities, have circulated a document to help stimulate interest in Jack Wills.

Meanwhile, Jack Wills’ founder Peter Williams hasn’t had the best luck with BlueGem, after he was seemingly pushed out of the business in August last year, reportedly following a row with the private equity firm over cashflow problems.

This wasn’t Williams’ first time leaving the retailer. He first resigned in 2013, when Jack Wills was being tipped for a £500 million IPO. However, he returned as chief executive in 2015 after his replacement, Wendy Becker, left amid faltering sales and profits.

In terms of fashion, questions have been raised as to whether Jack Wills’ signature “preppy look” is still in trend, regardless of price, due to the change in consumer behaviours.

He blamed the retailer’s decline on a “tired” store experience, “heavy with promotional signage and cluttered with overly logoed product”.

“Consumer tastes are evolving all the time as society and fashion moves on, so retailers – especially those with a niche offering like Jack Wills – need to keep evolving to stay relevant,” she said.

“Retailers need to focus on becoming more agile in response to consumer and market trends so that they can adapt quickly and seize opportunities when they present themselves, and deal with any risks from the threat of disruption and new competitors.”

He said: “While Hollister and Superdry are undergoing rapid course correction – with a repositioning at Hollister to move the brand beyond logos and brighten up stores, and at Superdry the old co-founder Julian Dunkerton is back on board to return the brand to health – it seems that Jack Wills has been caught sleeping.”

Flower said innovative experiential retail is a rising trend in the industry, and believes Jack Wills hasn’t taken this on board.

“Across the retail landscape, we’re seeing more retailers embrace the idea of experiential retailing and giving this a real go,” she told Retail Gazette.

“John Lewis, for example, has crowdsourced opinions from its customers and designed campaigns specifically around what matters to them, from rooftop gardens to events and workshops.

“The experience side of retailing is an increasingly important consideration to keep footfall flooding in.”

Matt West, chief executive of tech platform Feefo, told Retail Gazette that without a buyer and a sustained strategic plan, Jack Wills “could be another casualty of the high street”.

“If the business discover good and bad feedback, they could use it to strengthen the knowledge of their customers and their business,” he said.

It’s no secret that British retailers of all ilk are showing signs of struggle, but with some retailers defying the doom and gloom, it’s hard to determine what the future holds for Jack Wills. Perhaps, as a starting point, the retailer could embrace and adapt to the changes sweeping through industry, instead of choosing to remain “quintessentially British”.

The Retail Gazette has contacted Jack Wills for comment.