// He will begin his new role on January 1

He has also held senior positions at Carrefour, Nestle, Michelin and Hewlett Packard.

In his new role, Le Bleis will lead the luxury retailer’s supply chain team from London and will report to Burberry chief executive Marco Gobbetti.

“I am looking forward to working with him as we continue to strengthen the Burberry brand and position the business for growth.”

Last week, Burberry bolstered its boardroom with the appointment of former TV executive and Twitter board member Debra L Lee as a new non-executive director.

Coronavirus: Burberry offers up resources to fight against the outbreak 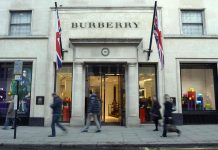 Burberry feels the coronavirus bite as majority of its stores close