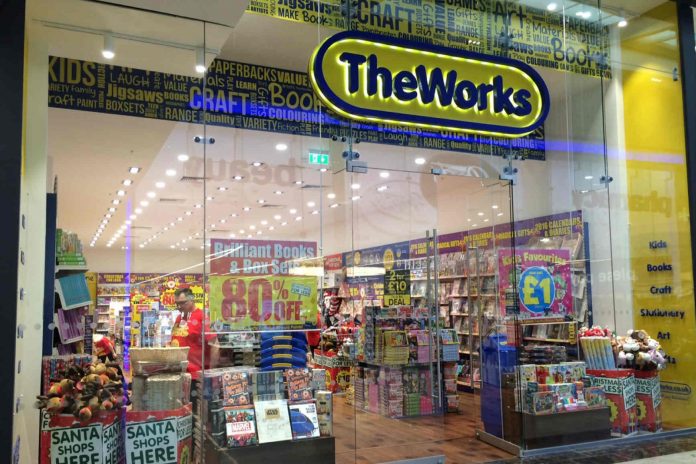 // For its Christmas period, The Works said like-for-likes went up 1.5%

The Works has reported a half-year loss and a slowdown in sales amid a decline in like-for-likes, while also revealing that chief executive Kevin Keaney is resigning with immediate effect.

Keaney, who had been with The Works for nine years and oversaw rapid growth and a stock market listing, will be replaced by chief financial officer Gavin Peck.

Peck has been with The Works since April 2018, making the move from Card Factory where he was commercial director.

Stepping into the chief financial officer role on an interim basis is head of finance Rosie Fordham.

READ MORE: Shares in The Works plunge 43% amid profit warning

For its half-year period ending October 27, The Works said adjusted EBITDA fell to a £4.3 million loss, compared to a £900,000 loss in the same 26-week period last year, which the retailer said reflected the seasonal nature of the business.

Meanwhile, adjusted loss before tax for the half-year period came in at £8 million, almost twice the £4.4 million loss that was recorded a year earlier.

While overall half-year revenue grew 5.4 per cent year-on-year to £96.4 million, this was at a much slower rate than the 15 per cent growth recorded last year.

In addition, the toys, books and stationery retailer said like-for-like sales declined 1.9 per cent during the half-year period, which it attributed to a “difficult consumer backdrop”.

It added that it would be refocusing its growth strategy by opening less stores and had no plans to open any more stores this financial year, although 20 are planned for 2021.

Looking at its Christmas trading, The Works showed signs of improvement after the half-year, thanks to strong in-store and online sales, but it was still a slowdown compared to the previous year.

Like-for-like sales grew 1.5 per cent during the 11 weeks to January 12, compared to the increase of 4.5 per cent that was recorded in the same festive period ending January 13, 2019.

“I am pleased to report that the company delivered a solid performance during the key Christmas trading period with like-for-like sales up 1.5,” Peck said.

“This was driven by growth in both stores and online.

“However, to ensure we are well placed to deliver profitable growth in the medium-term, we have taken action to refocus our strategy by opening fewer new stores, with a view to driving improved performance in our existing estate and increasing our focus on cost savings.

“We remain confident in the prospects for the company with the business trading in line with the board’s full-year expectations.”

He added: “I am delighted to be taking on the role of CEO. The Works is a great business with fantastic colleagues providing a compelling and differentiated offering for our customers.

“Building on the company’s established foundations, I look forward to leading The Works in its next phase and creating value for all of our stakeholders.”

Keaney said: “After an incredible nine years, I believe now is the right time for me to hand over to a new CEO to lead The Works through its next phase of development.

“While this has been a very difficult decision, it feels like the right time to take a break, spend time with my family and think about what I want to do next.

“It’s been a privilege to lead The Works over these past years and more recently as a public company.

“It is a tremendous business supported by incredibly talented colleagues. I am immensely proud of all that we have achieved together and I would like to thank the board and everyone at The Works for their support through the years.”