Wolf & Badger has reported record growth in April and May despite closing its stores and purely operating online amid the coronavirus lockdown.

In those two months, the retailer reported a 66 per cent year-on-year jump in overall sales compared to the same period in 2019, generating £2.8 million in ecommerce revenue alone.

Online sales grew 87 per cent year-on-year despite its Coal Drops Yard, London and SoHo, New York City flagships being temporarily closed due to lockdowns brought about by the pandemic.

READ MORE: Reopened stores present a new way of shopping – is it viable?

Categories which have performed particularly well include women’s jewellery, lingerie and nightwear, as well as homeware items.

April and May also saw a record number of new brand applications to the retailer, with a total of 750 potential suppliers looking to join the platform from 69 countries.

Through its partnership with DHL, Wolf & Badger now also provides duties, taxes and fees inclusive shipping for all customers in the UK, Europe, Australia, the US and Canada regardless of where each supplier is based. 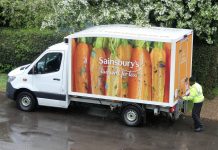