Games Workshop has seen its shares rise by 19 per cent after the retailer recorded an uptick in sales in its most recent quarter.

The Warhammer fantasy figurines retailer said trading for the three months to August 30 was ahead of the board’s expectations.

It recorded sales of around £90 million compared to £78 million for the same period last year.

Meanwhile, operating profit for the period was around £45 million, almost double the £28 million a year ago.

Games Workshop said it will pay out a 50p-per-share dividend to its investors after shares hit £10.42 in early trading.

Its market value reached £3.2 billion, which placed it above Marks and Spencer.

The company said thanks to its online and trade channels, it has recorded a steady growth during the period.

However, it noted that shops remain quiet after being forced to close during the coronavirus lockdown.

“The longer term impact on the group as a result of the ongoing pandemic is still unknown,” it added.

Ahead of the AGM next week, Games Workshop said that the current financial year was still in its early stages.

Chief executive Kevin Rountree said that the last financial year, which ended in May, was the best period of trading in the company’s history after it reported a five per cent rise in revenues and a 10 per cent rise in pre-tax profits.

Games Workshop operates 531 stores in 23 countries, of which 411 are run by only one employee.

Last year, its physical retail stores accounted for around 30 per cent of sales. 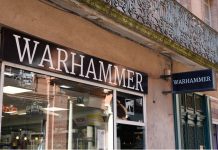