Unseasonably hot weather in September is set to have an negative impact on the profits of Bonmarche, according to the retailer‘ latest trading update.

The womenswear brand said it expected like-for-like sales at its shops to drop by eight per cent in the second quarter and first half of the year, prompting the business to predict its full year pre-tax profit to be between £5 million and £7 million.

However, today Bonmarche said trading in September was “extremely poor” due to the unseasonably hot weather which did no favours for the sales of new autumn ranges.

“We approach the beginning of the second half of the year facing considerable uncertainty as to market conditions,” the company said.

“The hot September has prevented us from gaining a representative measure of the strength of the autumn ranges, and our perception is that the clothing market generally has become more challenging.”

New chief executive Helen Connolly said she was “formulating my plans for the future”.

“The direction of travel is right, but the effectiveness of execution needs to improve,” she said.

“My plans are therefore likely to focus on improving the clarity of the customer proposition and operational improvements in all channels rather than a major strategic repositioning.

“I… am confident that despite the difficult conditions we are currently experiencing, the business will resume growth during FY18.” 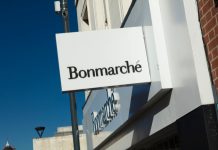 1500 jobs at risk as Bonmarche falls into administration again