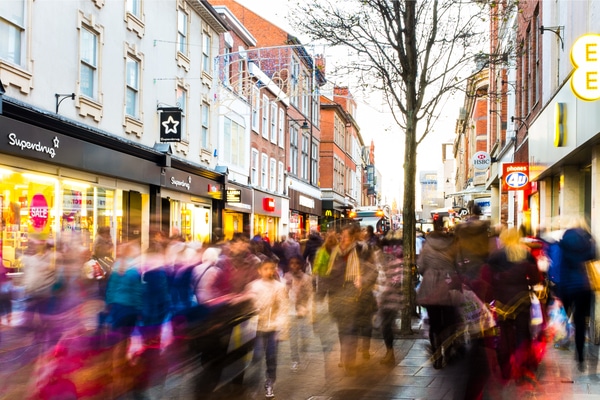 Footfall in retail parks dropped at its fastest rate in February since 2013, as Brexit starts “to have an impact on purchasing behaviour”.

New figures from the BRC-Springboard Footfall and Vacancies Monitor have shown that footfall at usually resilient retail parks and shopping centres both fell in the four weeks to February 25.

Overall footfall dropped by one per cent compared to last year, below the three-month average of 0.8 per cent but just over the yearly average of a 1.1 per cent decline.

Retail park locations saw a drop of 1.6 per cent compared to last year‘s increase of 2.5 per cent, accelerating from January‘s 0.4 per cent decline.

Shopping centres also saw a sharp decline in shopper numbers, dropping by 2.6 per cent, just below the three month average of 2.4 per cent.

“Visits to retail destinations fell by one per cent in February, which marks little change to what has been a familiar story over the past few years,” British Retail Consortium (BRC) chief executive Helen Dickinson said.

“Although, given the disappointing in-store sales so far in 2017, the decline in footfall last month is unsurprising.

“On closer inspection, there has been a steeper drop than normal in retail parks, with footfall to this shopping destination falling at the fastest rate since November 2013.

“In comparison, footfall on the high-street grew marginally, likely driven by its diverse offer.”

The high street saw an increase of 0.1 per cent during the month, performing much better than 2016‘s 2.9 per cent decline.

Springboard insights director Diane Wehrle believes Brexit anxiety could be to blame for the decline in retail parks.

“Footfall in February was a tale of two halves,” she said.

“Whilst footfall improved slightly with a drop of 1.0 per cent compared to 1.3 per cent in January however, this decline is not reflective of the stabilisation of consumer behaviour.

“Increasing uncertainty arising from the imminent triggering of Article 50 has certainly started to have an impact on purchasing behaviour, the types of destinations shoppers are visiting and how they spend their money.

“High streets are clearly benefiting as the destination of choice for dining and leisure, whilst shopping centres continue to underperform as they struggle with a weak entertainment and leisure offer, coupled with increasing caution amongst consumers around retail spend.