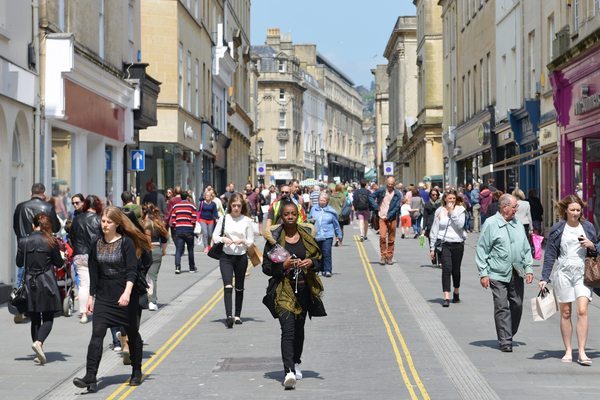 Footfall across the UK remained positive throughout April seeing the fastest growth in shopper numbers for three years.

New figures from the BRC- Springboard Footfall & Vacancies Monitor revealed a 1.6 per cent growth in footfall in April compared to 2016, well above the three-month average growth of 0.7 per cent.

This marks the first positive quarter since May 2014 and the highest level of growth since 2012, however this figure is likely to have been distorted by the Easter Holidays.

“The inclusion of the holidays in this period will have distorted this figure but even looking beyond this, the picture over the last quarter has been largely positive.”

Despite posting a 0.6 per cent decline in footfall, shopping centres rate of decline slowed from the 0.9 per cent quarterly average.

“As has been the trend for some months now, high streets across most of the UK attracted the largest increase in visitors out of all shopping destinations,” Dickinson added.

“This translated into good news for stores too, which saw their fastest annual sales growth since January last year.”

April also saw a marginal decline in vacancy rates across the UK, dropping from 9.3 per cent to 9.4 per cent.

According to Springboard‘s marketing and insights director Diane Wehrle this figure is largely offset by a sharp decline in London.

“The vacancy rate also improved very slightly in April to 9.3 per cent from 9.4 per cent in January, but this disguises increases in vacancies in all areas apart from in London, the East and the North & Yorkshire,” she said.

“The vacancy rate is perhaps a portent of things to come; inflationary pressures are likely to increase, which could suppress customer behaviour and therefore occupier demand, notwithstanding the emergence of new occupiers who initially tend to focus on London.”