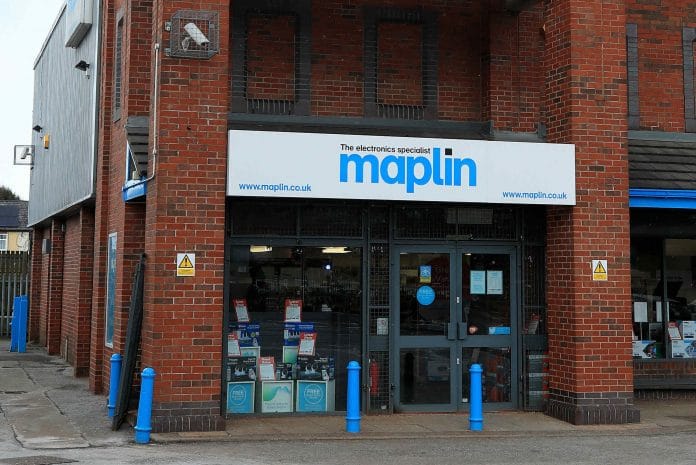 June 2014: Rutland Partners buys Maplin for £85 million, with a view to “improving” the business through restructuring and investment.

It aimed to build on its recently improved performance to “release further potential” and grow what appeared to be a business with an aptitude for growth.

Though Rutland Partners had experience in investing in underperforming businesses and turning them around, it is likely it underestimated the significance of the online threat despite the warning signs.

Its previous owners purchased Maplin for £244 million in 2004. By 2014 Maplin already came with significant debts. According to a statement issued at the time of Rutland’s acquisition: “After settlement of debt, the consideration paid for the business was £14.7 million.”

April 2015: Maplin reveals strongest growth in seven years. Just under a year after it was bought, things seemed to be going well and Rutland’s turnaround was going to plan.

“The results show that our focus on improving the Maplin product and service proposition, along with our commitment to the best customer experience, are all working extremely well,” Rutland said at the time.

The results were driven by Maplin’s fresh push into online retail, with its newly updated platform driving 20 per cent growth and accounting for 10 per cent of total sales.

Over the next few months Maplin seemed to perform well, holding back competition from its online rivals who offered cheaper goods, but none of the technical knowledge of its staff members.

The company’s annual statement attributed “declining footfall” to the drop in sales, but made sure to highlight the strong performance of its online arm, which accounted for 13.2 per cent of sales that year.

By this point Maplin seems to have started to bear the brunt of consumers’ shift online. Though this helped boost its online arm, it also detracted from its key high street offering on which it relied very heavily.

“The biggest risk to the business in the foreseeable future remains consumer confidence”, it said in a statement.

Like many other high street retailers, Maplin was vying to win back customers to its physical stores by expanding its offering.

The iSmash concessions came just months after it announced a Game concession trial.

By this time in late 2017, it is likely Maplin knew troubles were afoot. Though this partnership may not seem significant, it speaks volumes to where the company’s priorities lay: driving people back in store at any cost.

“We are constantly looking to expand our services proposition, as we look to create a customer journey that supports those who shop with us all the way from pre-purchase and consideration to after sales support,” it stated at the time.

Insurers smelt something was off late last year and effectively gave Maplin a vote of no confidence ahead of the vital Christmas trading period.

“This resulted in key suppliers refusing to provide stock to the retailer, contributing to a 7% decline in like-for-like sales over the Christmas period.” GlobalData’s retail analyst Eleanor Parr said.

This was the beginning of the end for the retailer, which by this point would have been relying on a boost from Christmas gifting to restore confidence and plug financial holes.

Maplin needed the experienced leadership, but Meakin is likely to have jumped ship before the business sunk.

This added another nail in the coffin for Maplin, who was struggling to claw back confidence from investors and suppliers.

News of Maplin’s financial woes was now very public, but the retailer remained confident a swift sale would be made.

“We are in advanced talks with a number of parties and expect to be in a position to announce a solvent sale of the business within days,” a Maplin spokesman said.

One of the key suitors for Maplin by this point was Edinburgh Woollen Mill (EWM) which, much like Rutland, was a specialist in turning around struggling retailers.

A week later and Maplin’s hopes of a swift sale were gone. Adding further pressure to the sales process £15 million in VAT tax was due to be paid within a matter of days, a bill any buyer would have to foot.

EWM was reportedly keen to keep Rutland in the picture and ensure they retained a role in running the business.

The Retail Gazette understands that this demand was due to EWM initially being told by Rutland that they wanted to work alongside them, but questions were raised when, in later stages of negotiations, Rutland decided they wanted to sell their stakes completely.

EWM’s demands proved to be the final nail in the coffin for Maplin, who failed to agree on how Rutland would stay in the picture before its debt obligations were due.

Reports suggest that EWM walked away at the last minute.

Zelf Hussain, Toby Underwood and Ian Green from PwC were appointed as administrators, plunging 2500 jobs across 200 stores into jeopardy.

The future of Maplin now remains unclear, though it has stated it will continue trading through the administration process.