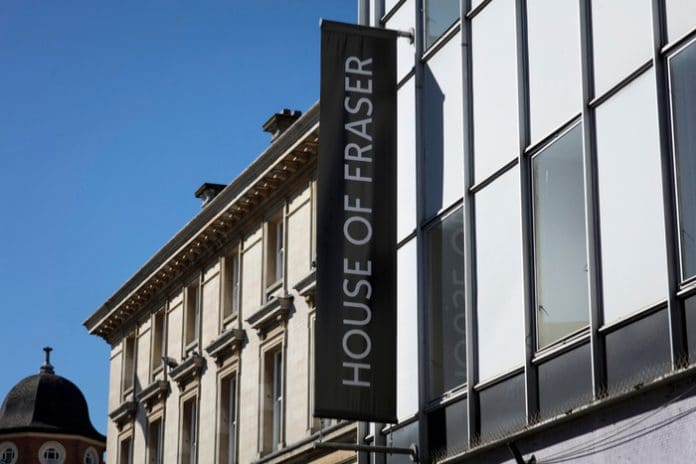 A rescue deal for House of Fraser remains uncertain amid ongoing talks with lenders, who are demanding more clarity over funding before the restructuring plan is finalised.

According to Sky News, lenders to the embattled department store retailer are demanding a fresh injection of funding from its Chinese shareholders, ahead of the launch of a company voluntary arrangement (CVA) that could see the closure of almost half of House of Fraser’s store estate.

Lenders and their advisers at EY have reportedly been frustrated over a lack of information over new financing for the department store.

Sky News reports that senior lenders HSBC and Industrial & Commercial Bank of China are understood to be demanding evidence that up to £70 million of new capital, which was promised weeks ago, would be invested into House of Fraser.

In the coming days, the retailer is due to launch a CVA – a form of insolvency that allows retailers to shut loss-making stores, reduce rents and cut costs in a bid to keep the business in operation and avoid administration.

However, in order for it to go ahead, the CVA needs the backing of House of Fraser’s creditors, which includes landlords and lenders.

Sources speaking to Sky News said negotiations have been taking place throughout the week and are expected to continue for a few more days, but there has been a mix of doubt and confidence regarding an agreement to be reached with lenders before the CVA is launched.

Without a CVA, there is a dramatic increase in the risk of House of Fraser being forced to call in administrators.

A spokeswoman for the department store said that “constructive engagement continues between all parties”.

House of Fraser confirmed plans to launch a CVA one month ago, after weeks of speculation regarding its financial health.

The CVA was confirmed the back of a conditional agreement between Hamleys parent company C.banner International to acquire a 51 per cent stake in House of Fraser from current majority shareholder Nanjing Cenbest.

However, while a shareholder circular was supposed to have been issued by the end of May, it could now be delayed to July 26.

House of Fraser is also facing opposition from landlords who who would bear the brunt of the rent cuts or store closures that come with the CVA.

The proposed CVA also places the future of House of Fraser’s 5000 directly-employed and 12,500 concession staff members in jeopardy.