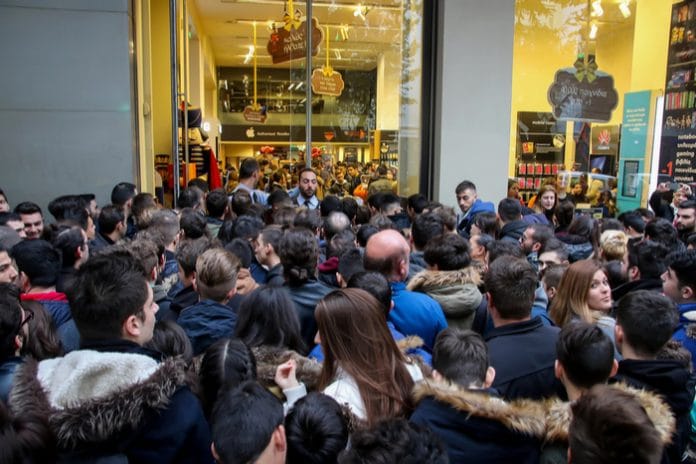 Following weeks of anticipation and marketing bombardment, a camera crew at Currys PC World stood anxiously awaiting the violent stampede of bargain hunters that had all but destroyed participating stores on Black Friday for the past few years.

Although the horror movie-esque images of shoppers piling through barely opened shop doors, trampling over each other and fighting for big-screen TVs like the last scraps of food must have been at the forefront of their minds – what actually greeted them was perhaps even worse.

The now infamous and somewhat tragic video of a lone, rather sheepish shopper strolling into the store last year and then immediately walking out paints an accurate portrait of the current sentiment surrounding the sales event.

This week Amazon announced that Black Friday deals would run for longer than ever this year, starting on November 16 and lasting a full 10 days. Despite its best efforts to drive up the hype in the UK to levels seen in the US, something they had largely succeeded in doing for a number of years, Amazon’s crown jewel is becoming less and less appealing for both retailers and shoppers.

Days earlier, B&Q became the first major retailer to shun the event, citing its own research which found that nearly half of shoppers said they weren’t planning to make any Black Friday purchases this year.

“With less than 130 days between Black Friday 2018 and the date we officially leave the EU, retail analysts have predicted a sharp decline”

Although Black Friday is still very much an event to be reckoned with, having seen sales reach yet more record highs last year, numerous factors have contributed to the country’s growing disenfranchisement with the event.

Consumers’ personal finances are being stretched and their willingness to splash out on goods, no matter how cheap they may appear, is at a low not seen for a decade.

“Consumer confidence on Black Friday 2017 was at its lowest since the Brexit result,” she said.

“With less than 130 days between Black Friday 2018 and the date we officially leave the EU, retail analysts have predicted a sharp decline in the number of people visiting high street shops – uncertainty about what the future holds understandably affects confidence when spending on non-essential items.”

While high street sales have clearly declined, Black Friday was born online, and online retailers continue to be its key beneficiary, seeing an 11.7 per cent growth last year.

However, Black Friday’s problems run deeper, as many shoppers have started to realise that many of the bargains aren’t all they’re cracked up to be.

Last year, consumer group Which? warned customers that more than half of 2017’s Black Friday deals could in fact be found cheaper at the same retailers at different times in the year.

“Despite the continued popularity of Black Friday, especially online, sentiment around it is changing. More than half of shoppers now feel that the discounts are not as good as they’re made out to be,” Shepherd said.

“This suggests increased cynicism about Black Friday claims – in particular on the extent of discounts – which is making consumers apathetic towards it as a shopping event.”

Its not just consumers that are turning their backs on Amazon’s event, with the retail industry in such a delicate state, heavy discounting can easily tip the balance for retailers teetering on a financial knife edge in the wrong direction.

Referring to the disappointing online sales drop in 2018’s third quarter, IMRG’s Andy Mulcahy said: “Several retailers have spoken publicly about the scale of discounting that has been active across various retail sites, meaning that the industry is already heavily involved in discounting before we even get near to Black Friday.”

Black Friday is often a loss leader for retailers, but many take part through fear their stores will be shunned by consumers over the vital Christmas period if they don’t. However, out of necessity, retailers are unable to offer the deals which once made Black Friday such an attractive event.

According to Fulfilmentcrowd’s Gemma Tomlinson, this has reduced Black Friday to little more than another expectation.

“Retailers were far more enthusiastic about embracing the US sales day in previous years; as we all remember the 2014 riots when supermarkets slashed their prices so considerably that it sent shoppers into a frenzy to grab a bargain,” she explained.

“Black Friday does nothing to grow the UK retail market, it merely brings anticipated Christmas sales forward, ensuring that margins are cut to the bone for longer”

“Fast forward to today and Black Friday is just another consumer expectation, as is the January sales kicking off pre-Christmas, and instead, it has now become a date marking the unofficial start of the nation’s festive shopping season.

“The only real winner in Black Friday is the consumer, with retailers under increasing pressure to offer extended discounts and constant low prices year-round, regardless of the damage to margins and net profit, just to stand out, lure in shoppers and meet sales targets.”

This relentless pressure to offer discounts can lead to far worse than just disengagement from your consumers. Some, including retail app Jisp’s chief executive Julian Fisher, believe it is outright damaging to the retail industry.

“It’s no surprise that last year’s Black Friday failed to increase high street sales – it’s a gimmick that should be scrapped,” he said.

“Black Friday does nothing to grow the UK retail market, it merely brings anticipated Christmas sales forward, ensuring that margins are cut to the bone for longer, impacting the viability of retail operations.

“For consumers, Christmas discounts represent true value for money, as opposed to the misleading prices and false promotions touted by Black Friday.

“Shoppers are now wise to these tactics and not only does it damages sales, but the credibility of the high street”.

Although it’s likely this year’s Black Friday will still rake in billions of pounds, it’s becoming harder for retailers to justify not only the discounts but the length they need to run them for, especially while consumers appear less and less interested.

The cracks were beginning to show last year, but could 2018 be the year the tides turn on Black Friday?